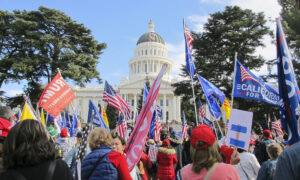 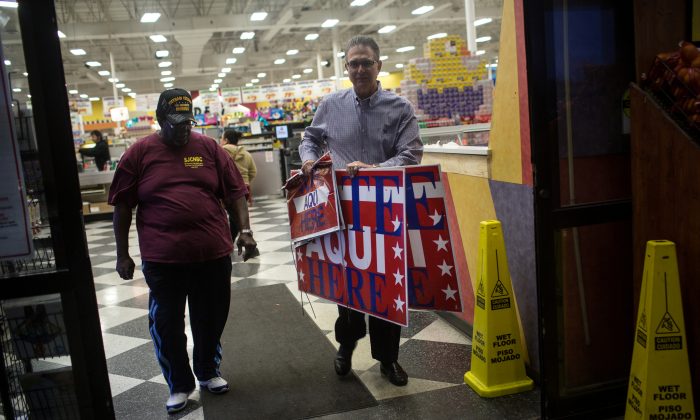 Volunteer election clerks Allie Green Jr., left, and Paul Tryhus, right, briefly leave a Fiesta Mart supermarket, a polling location, to place voting signs, before polls open in Austin, Texas on Tuesday, March 1, 2016. Republicans will vote in 11 states, with 595 delegates at stake. Democrats will vote in 11 states and American Samoa, with 865 delegates up for grabs. Some states have contests Tuesday for only one party. (AP Photo/Tamir Kalifa)
Politics

WASHINGTON—Five more states are chipping in verdicts on the Republican and Democratic presidential contests in races largely overshadowed by Super Tuesday and the big contests still to come. Yet candidates eager to gather enough support to snag their party’s nomination—or at least stay relevant—are happy to scoop up delegates wherever they can.

With the GOP field now down to a quartet, Donald Trump, Ted Cruz, Marco Rubio and John Kasich are competing in Maine, Kansas, Kentucky and Louisiana. Democrats Hillary Clinton and Bernie Sanders are vying for support in Nebraska, Kansas and Louisiana.

Hunting for delegates, Trump added a last-minute rally in Wichita, Kansas, to his Saturday morning schedule and Cruz planned to stop in Kansas on caucus day, too, one day after Rubio visited the state.

Trump’s decision to skip an appearance Saturday at a conference sponsored by the American Conservative Union in the Washington area to get in one last Kansas rally rankled members of the group, who tweeted that it “sends a clear message to conservatives.”

The billionaire businessman’s rivals have been increasingly questioning his commitment to conservative policies, painting his promise to be flexible on issues as a giant red flag.

“Donald is telling us he will betray us on everything he’s campaigned on,” Cruz told voters Friday in Maine.

Trump’s rivals, who’ve tried just about everything to disrupt his juggernaut, can take comfort in one thing: The rules for Saturday’s round of voting make it easier for candidates to claim a share of the delegates than was true in some Super Tuesday states, when Trump rolled up seven wins to three for Cruz and one for Rubio.

Some states require candidates to get at least 20 percent of the vote to claim any delegates, but candidates in Kentucky must get just 5 percent of the statewide vote to get delegates, and in Kansas and Maine the bar is 10 percent. In Louisiana’s primary, there is no threshold to earn a portion of the delegates.

Behind the Scenes: What You Didn’t See on TV During the Republican Debate

While that may offer some encouragement to the also-rans, it also probably doesn’t help to quickly clarify the race overall.

With the GOP race in chaos, establishment figures are frantically looking for any way to stop Trump, perhaps at a contested convention if none of the candidates can roll up the 1,237 delegates needed to snag the nomination. Going into Saturday’s voting, Trump led the field with 329 delegates. Cruz had 231, Rubio 110 and Kasich 25. In all, 155 GOP delegates are at stake in Saturday’s races.

In Louisiana, Clinton was hoping that strong support from the state’s sizable black population will give her a boost. Both Democrats have campaigned heavily in Nebraska and saturated the state with ads. In Kansas, Clinton has the backing of its former governor and onetime Health and Human Services secretary, Kathleen Sebelius. Sanders held a pre-caucus rally in Kansas’ liberal bastion of Lawrence hoping to attract voters.

On the Republican side, Kentucky’s caucuses were tailor-made—and paid for—by a candidate who’s no longer in the race: home-state Sen. Rand Paul. The early March presidential caucus was created so Paul could run for president and re-election to the Senate without violating a state law banning candidates from appearing on the ballot twice in one day. Even though Paul is long gone from the presidential race, he’s still on the hook to pay $250,000 plus other expenses for a caucus that will choose between four people not named Paul.

Trump is the only one of the four to visit Kentucky, promising during a Louisville appearance that he’d lead a comeback for the state’s struggling coal industry.

All four candidates have spent time in Louisiana, where Cruz hopes for strong support from born-again Christians, but so far Trump has been siphoning a considerable share of evangelicals.

Trump’s “tapped into a level of frustration that transcends religiosity,” said Ed Chervenak, who heads the University of New Orleans Survey Research Center.

Trump and Cruz both campaigned in Maine in the past week, but Rubio skipped the state.