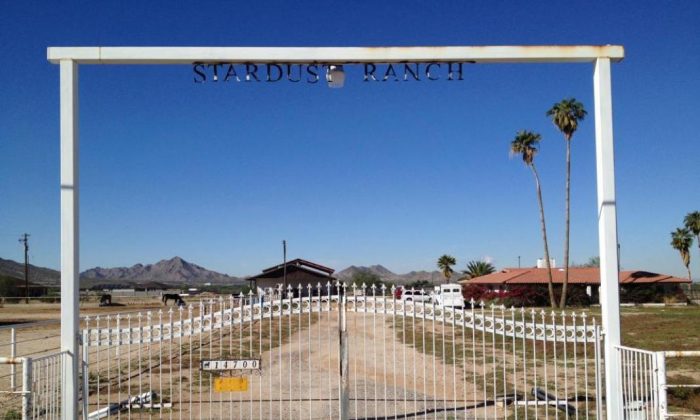 The gate to Stardust Ranch, also known as "Alien Ranch" in Rainbow Valley, Ariz. (Courtesy of John Edmonds)
US News

$5 Million ‘Alien Ranch’ in Arizona May Have Buyers

A ranch in Rainbow Valley, Arizona, that is on the market for $5 million has generated a buzz, and not because it has a 10-foot swimming pool, five-bedrooms and four-bathrooms on almost 10 acres of land—but for reports of paranormal activity that are driving its owners away.

“If anybody [had ever] said to us, ‘Hey, by the way, this is alien central,’ I would have said, ‘I’m out of here,’” owner John Edwards said via telephone.

“This famous property has been featured on the Travel Channels’ series “Ghost Adventures” and numerous websites and documentaries due to it’s [sic] long-running history of alien and paranormal activity,” the listing reads.

Edmonds, who lives there with his wife, said they had no idea anything was special about the property until they moved there in 1996.

The first sign that something was amiss was when they stepped through the door and found all the previous owners’ belongings still there. They then called their realtor who told them he would have it cleared out by the end of the day. When they came back, the house contents were gone, but when they went outside, they found everything dumped in the swimming pool, which was full of water.

“Everything except the family dog was in the pool,” Edmonds said.

The next week they got a visit from a man who Edmonds described as a “desert character” who looked homeless. The man, who was carrying a machete, told Edmonds that he lived there and that he was the one who killed the “monsters.”

When Edmonds told him he couldn’t stay there and that they didn’t have employment for him, “he shook his finger at me and said, ‘You’re going to be very, very sorry.’”

That was the beginning of a long string of strange occurrences that have only become more bizarre, Edmonds said.

Soon they started to see strange lights in the sky and UFOs. Later, “these little grey aliens” started showing up in the house, that later attacked him and his wife, he said.

“Lots and lots of weird stuff.”

He says there are two “portals” on his property, and that beings from other realms travel through them. He says one of the portals is in his house and the other one is at the back of his property.

“I walked in on three of these alien “greys” attacking my wife in the bedroom and literally, she was levitated several feet off the surface of the bed, and [they] directed her through the house out into the parking lot and up into a cone of light that was waiting,” Edmonds said.

He shot at the aircraft with an AK-47, he said, and they dropped her, leaving her with only minor injuries.

“We spent the next few weeks getting over it and trying to figure out what we should do. It was just a horrible situation,” Edmonds said.

He says he’s killed 19 of the “greys” over the years and says he has the battle wounds to prove it.

He posted a photo of a mark on his calf that he says came from another fight with aliens.

He’s also found three of his horses mutilated on the property, he says, but they weren’t just any mutilations.

“Almost like cattle mutilations where there was no blood but there were incisions. Parts of the horse were removed—the anus had been gored out and the guts removed inside. The eyes were removed, the hooves were removed. I mean they were terribly, terribly damaged.”

He called the Arizona Livestock Board and the sheriff came out to investigate the strange death, he said.

“I could tell that this wasn’t the first time someone had called and complained of this kind of thing,” Edwards said.

The neighbors have also experienced strange phenomena, he said, but are too afraid of being called crazy to speak about it.

“Apparently I’m the only person who doesn’t care if you call me crazy or not,” he said. “If people don’t believe me, I could care less.”

One person who had been a previous tenant of the house has spoken about it publicly.

Gina Irons told NBC affiliate KPNX-TV that her family moved into the house in the 1970s.

She said the previous owners were tight-lipped about the life on the property, and they soon found out why.

“My mother, my siblings, and I all saw ‘it’ in slightly different forms and colors (usually some variation of green), in different places, and there was always a big drop in temperature whenever it was around. My brother’s room—just to the right of the hallway entrance—was always ice-cold, even in summer. We didn’t have an air conditioner back then so that old house got warm. As kids, we decided that must have been where it lived.”

She moved out of the house in the ‘80’s, and has “never had the least bit of desire to ever go back inside,” she said.

Edwards said he’s also tired of dealing with all the paranormal phenomena, and wants to move his horse sanctuary Hopeful Hooves to another location. He said they’ve chosen a property in Maine where they hope to move to with the horses once the property sells.

As for buyers, his real estate agent said that all the media publicity has been good, but as of the end of October, about two months since she got the listing, she hadn’t had any calls about it.

Edmonds said that as of Oct. 29, he’s had three offers, two of which met the asking price.

Whoever buys the property, Edmonds said, should be a grounded and good person who isn’t easily perturbed by the paranormal.

He says it is his faith in God that has kept him strong all these years.

“I’m a very spiritual person. I believe in God very strongly, and I believe that I live my faith, and so I have no reason to be afraid of anything. Ever,” he said.