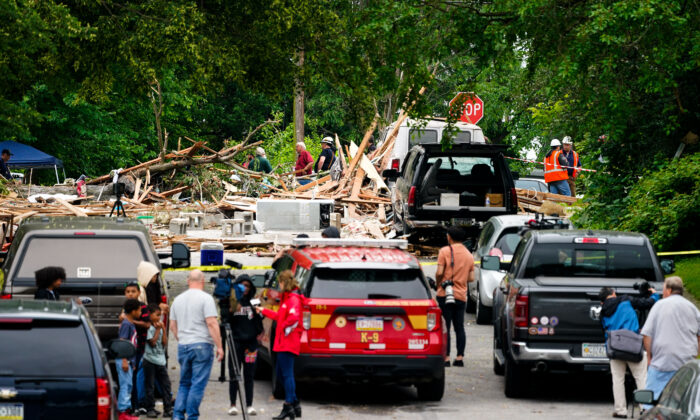 Crews work the scene of a deadly explosion in a residential neighborhood in Pottstown, Penn., on May 27, 2022. (Matt Rourke/AP Photo)
Local News

Five people were killed and two injured after an explosion on Thursday in Pottstown, Pennsylvania.

The fire department, EMS, and police were dispatched to the area of Hale Street and Butler Avenue at 8:07 p.m. local time for a house explosion. The authorities found a house had exploded with multiple victims needing medical care when they arrived on the scene.

The explosion killed five people and injured two. One of the two injured people is in critical but stable condition, and the other one is in surgery for unknown injuries, Pottstown Borough Manager Justin Keller said.

The investigation is ongoing and there’s no additional information available, he added.

The Pottstown Police Department confirmed on Friday that the explosion happened in the 400 Block of Hale Street. The police urged people to avoid that area.

“Please avoid the area of the blast as we are working with multiple agencies to investigate and clear the area,” the police wrote in a social media post.

According to WPVI-TV, the five victims who were killed are:

The two injured persons are:

The relationship between the victims has not been disclosed.

Neighbors told WPVI-TV that they frequently smelled gas in the area.

Officials said there are gas lines and confirmed there was a propane tank on the scene that was not destroyed.

However, the authorities are still working to find out what the propane tank was being used for.