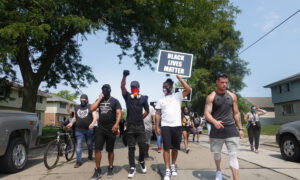 More Than 250 Arrested Since Blake Shooting in Wisconsin
0 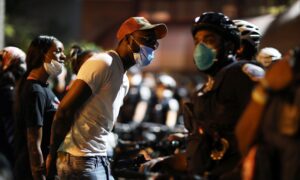 A 6-year-old boy and four others were injured in a shooting at a street party in New York City early on Monday morning, officials said.

“What we have right now is she was getting out of a cab with her son and then two individuals pulled out firearms and started shooting and they were both struck,” NYPD Chief of Detectives Rodney Harrison told the New York Post.

Authorities said the shooting occurred in Crown Heights, Brooklyn, near an outdoor J’Ouvert celebration. It’s a large street party as part of Carnival in many Caribbean islands.

Two men, who were not named, were arrested, officials said.

“At tonight’s senseless shooting in Brooklyn where five people were shot, officers also arrested two men—and recovered two guns. The investigation is in its early stages and is ongoing,” added Chief Terence Monahan.

Officials said the boy was shot in the leg, and a 47-year-old woman and three men suffered gunshot wounds. None of the injuries are considered life-threatening, police said, according to CBS News.

Police told the network that it’s not clear if the shooting was connected to the J’Ouvert celebration.

Officials told Channel 4 News that the young boy’s mother was the woman who was shot.

“Only reason she was over here was because her daughter wasn’t answering the phone. After she spoke to her daughter, they were walking right here, and that’s when three shots went off,” a witness said. “I saw the little boy on the floor full of blood, and I ran.”

President Donald Trump appeared to weigh in on the incident.

“Rochester N.Y., Brooklyn N.Y., Portland – All had bad nights, all weakly run by Radical Left Democrat Governors and Mayors! Get the picture?” he wrote on Twitter.