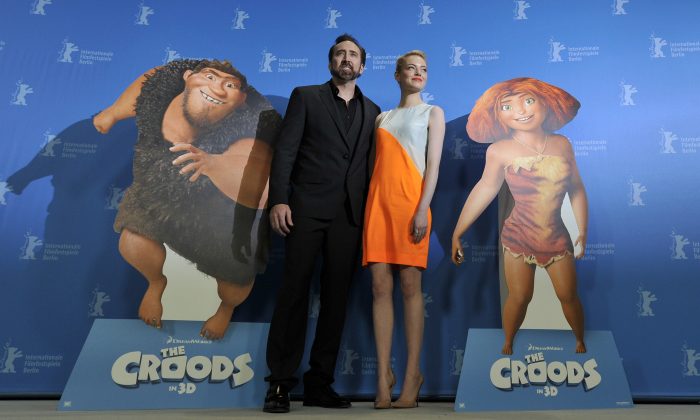 U.S. actor Nicolas Cage and US actress Emma Stone pose during a photocall for the film 'The Croods' presented out of competition during the 63rd Berlin International Film Festival Berlinale in Berlin on Feb. 15, 2013. (Gerard Julien/AFP/Getty Images)
China

5 Hottest Western Movies in China in First Half of 2013

The DreamWorks Animation 3D comedy adventure of an isolationist cavemen tribe was an unprecedented box-office hit in China.

The Croods may have struck a familiar note with Chinese audiences. The tribe members all believed that news is bad, and that they should never leave the cave. “I would never do anything that is different,” one of them said.

But their lives were about to change when they were forced to leave their cave and embark on a journey through a dangerous wilderness in search of a new home.

Directed and written by Kar Wai Wong, The Grandmaster is the story of Ip Man, the legendary martial art master who trained Bruce Lee, played by Tony Leung.

Steve Boone on RogerEbert.com gives the film three stars. He says, “The Grandmaster is about the respect an artist merits and the ways in which times of war and economic upheaval erode that respect.”

Peter Travers on RollingStone.com called the film, “off-puttingly disjointed, but it’s also dazzling in its startling action and ravishing romance” and “Wong is capturing a long view of Chinese history…”

Set in the antebellum era of the Deep South and Old West, the film follows a freed slave who treks across the United States with a bounty hunter on a mission to rescue his wife from a cruel plantation owner.

A review on theguardian.com called it “a horribly funny slavery western—and Samuel L. Jackson is extraordinary as the ultimate Uncle Tom.”

And imdb.com said it is “Brutally hilarious and quite messy, but a total blast from start to finish …”

The latest sequel to the round of American Star Trek science fiction films, with Benedict Cumberbatch, Chris Pine, and Zachary Quito.

The plot of Into Darkness takes place one year after the previous installment, with Kirk and the crew of the U.S.S. Enterprise sent to the Klingon home world, seeking former Starfleet member-turned-terrorist John Harrison.

Most reviewers said they loved it. “It’s visually spectacular and suitably action packed,” according to Rottentomatoes.com.

The 2012 German drama and science fiction film with Tom Hanks and Halle Berry attempts to document the paths of reincarnation of several individuals over the span of hundreds of years.

The official synopsis for Cloud Atlas describes the film as: “An exploration of how the actions of individual lives impact one another in the past, present and future, as one soul is shaped from a killer into a hero, and an act of kindness ripples across centuries to inspire a revolution.”

Roger Ebert rated it “five stars,” calling it “one of the most ambitious films ever made.”