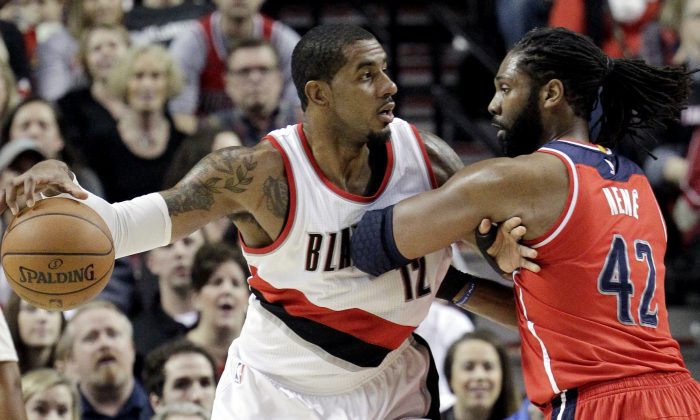 Carmelo Anthony made it to the All-Star team despite a horrid season for the Knicks, and he announced this week he’ll be doing some recruiting over the weekend.

“It will create some great momentum here in the city just by having All-Star Weekend in New York,” Anthony said. “Energy … will be surrounding the city, starting on Monday, Tuesday, all through the week. And just for me to kind of be that ambassador for the city for the weekend, that means a lot, that I can represent New York here in my hometown. Kind of welcome everybody, Anthony told the New York Post.

He also said that players will get to feel the energy in Madison Square Garden. “The Garden will be lit up, it will be bright, there will be a lot of people in there, it will be loud and it will be exciting. So for other players to see that, I am pretty sure that will be impressive,” he said.

The real question is–who exactly will Anthony be targeting that could realistically join the Knicks for next season? Because some players set to be free agents–such as Marc Gasol, LeBron James, and Tim Duncan–can probably be counted out at this point.

Check out five players who could be lured to the Knicks below.

Aldridge, to many, falls into the same category as Gasol. The 29-year-old Blazers forward has voiced his intention to return to Portland, the only team he’s ever played for.

But the Blazers lost badly to the Spurs in last season’s playoffs, and another poor showing that leads to an exit in the first or second round could lead to concerns for Aldridge, prompting him to join Carmelo in New York.

Aldridge, who will be an unrestricted free agent, will command a max contract, meaning the Blazers can offer him more money than other teams. If that scenario played out with the Knicks, the team would be forced to fill out the roster with lower-tier free agents due to a lot of money being committed to Aldridge and Anthony, who signed a max contract last offseason.

Millsap is enjoying success with the Atlanta Hawks, but could be enticed to move on in order to make more money.

The chances of Millsap leaving would likely decrease is the Hawks make it to the Eastern Conference finals or further in the playoffs.

The 29-year-old is playing in his second season with Atlanta after spending his first seven seasons with the Jazz. He’s averaging 17.1 points, 8 rebounds, and 3 assists.

Millsap is coming off a two-year, $19 million contract. He will probably not command a max contract, making him an even more attractive free agent. He’s going to be an unrestricted free agent.

Knight has been at the helm of the Milwaukee Bucks’ resurgence this season, but could potentially be lured to the big city.

The 23-year-old just missed out on a All-Star nod, but is traveling to New York to participate in the skills challenge.

Knight was drafted by the Detroit Pistons but traded to the Bucks in the offseason of 2013 in exchange for Brandon Jennings. He’s averaging 19.9 points, 5.9 assists, and 4.7 rebounds in his second season with the team, becoming more of a distributor under new head coach Jason Kidd.

Knight, who will be an unrestricted free agent, is coming off his rookie contract, and will probably not get a max contract. His youth and upside make him a top target in this year’s free agent class.

Perhaps the best shooting guard set to hit the market, Matthews could also return to the Blazers or be drawn to another team. As with Aldridge and other Western Conference free agents, Matthews may view an Eastern Conference team–even the Knicks–as attractive because there’s fewer good teams in the conference.

The 28-year-old is participating in All-Star weekend in the three-point contest, after shooting almost 40 percent from long-range this season. He’s averaging 16.5 points, 3.5 rebounds, and 2.3 assists this season, and is known as a defensive force as well.

Matthews went undrafted but made it to the Jazz on a one-year deal. Later in the 2009-10 season, he became the starting shooting guard. But the Blazers signed Matthews as a restricted free agent to a five-year, $34 million offer sheet, and the Jazz decided not to match it.

Matthews will likely command a similar contract for a bit more money. Matthews will be an unrestricted free agent.

The Italian shooting guard is certainly on few radars, particularly because Spurs players don’t often depart in free agency. But the 28-year-old may seek more minutes on different team, as he only averages 23.6 for San Antonio.

Belinelli is a shooting specialist, and is also going to All-Star weekend to participate in the three-point contest. He’s shooting 38 percent this season, and won the contest last year. He’s averaging 9.8 points, 2.7 assists, and 2.2 rebounds.

Belinelli has moved around a lot in his NBA career, being traded twice. He signed with the Spurs in the 2013 offseason after contributing to the Bulls in the previous season.

Belinelli is making $3.4 million this season, and will likely command a slight raise. He’ll be an unrestricted free agent.