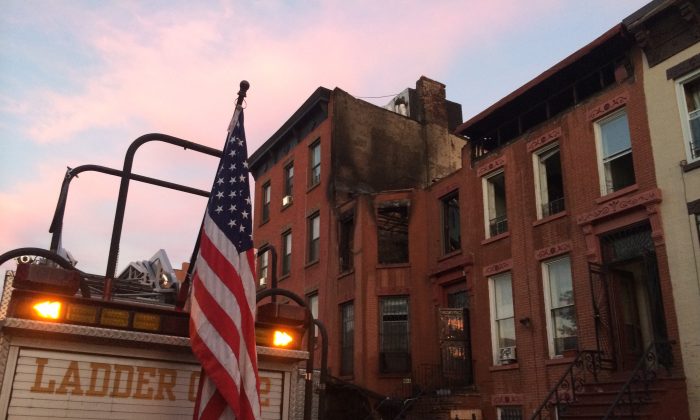 Five firefighters were injured putting out a blaze at 684 Halsey St. in Brooklyn’s Bed-Stuy neighborhood on September 7, 2014. (Matt Gnaizda/Epoch Times)
Crime and Incidents

Five firefighters were injured in a blaze Sunday evening in Brooklyn’s Bedford-Stuyvesant neighborhood. The fire started on the top floor of a three-story brick home at 684 Halsey St, with flames and smoke billowing out through two of its street-facing windows.

“The place was just burning,” said next door neighbor Sabrina Brown, standing on her front steps a couple hours later, gazing up at the burned-out home, its ceiling now just a crosshatch of blackened pipes and beams open to the sky.

Firefighters were dispatched at 5:41 p.m. It took them ten minutes to put out the flames with hoses, plus an additional hour or so to inspect the building and extinguish any smoldering remains, according to Battalion 37 Chief John Murphy.

Murphy declined to comment on how the five firefighters were hurt, or how seriously.

John Mathurin, a Jamaican who goes by “Jah,” owns a home four blocks away, where he rents out his extra unit. He said he is concerned his tenant could start a fire like this, and is considering not renewing her lease.

Neighborhood resident John “Jah” Mathurin takes a photo of the burned-out home at 684 Halsey St. as he rides by on his bicycle, September 7, 2014. (Matt Gnaizda/Epoch Times)

Murphy said the cause of the fire is yet to be determined by the fire marshals.

While checking for additional sources of fire, firefighters tore up part of neighbor Sabrina Brown’s roof, though the fire didn’t damage her home’s interior. Neither the city nor the fire department pays for damage firefighters may cause neighboring buildings while performing their duties, according to Battalion Chief John Murphy.

“I hope they have insurance,” he said.