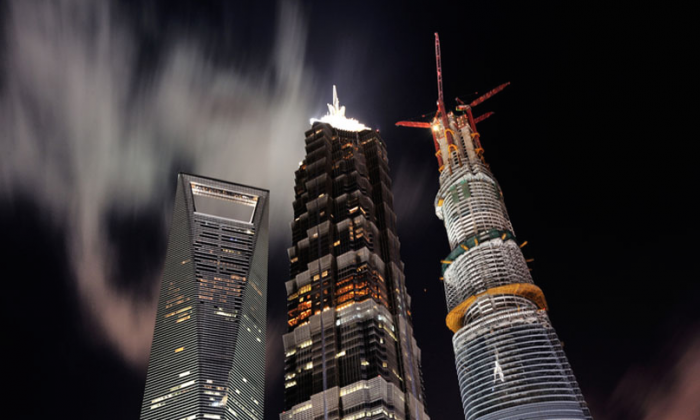 China’s architectural curiosities have been the subject of avant-garde interest, dismay, ridicule, and more recently, indications by the state that they are no longer welcome in the Middle Kingdom.

Whether or not the authorities will make good on their directives remains to be seen. But for now, the odd edifices—the combined result of China’s sudden economic rise and foreign modern art tastes—stand where they were erected.

This $500 million L’Avenue building, built to evoke the shape of a riding boot, was opened in 2013 in the Hongqiao Economic Zone of Shanghai. It began as a 2007 collaboration between LVMH, the French luxury goods conglomerate, and a Hong Kong and Macanese business magnate. Despite the sponsorship of over 20 brands under LVMH, including Dior and Fendi, the 1.5 million square foot project has been a commercial failure. In 2015, L’Avenue was sold to The Blackstone Group L.P., a New York based multinational private equity corporation.

Shanghai, once known as the “Paris of the Orient,” has no shortage of odd architectural creations. In 2013, with the completion of the 632-meter-tall (about 2070 feet) Shanghai Tower, Chinese netizens poked fun at it and two nearby skyscrapers as a trio of “kitchen appliances,” with Shanghai Tower—the world’s third-tallest building—being likened to an egg beater.

The 492-meter Shanghai World Financial Center, with its wide, tapering roof and rectangular aperture, was opened in 2008. It and the neighboring Jin Mao Tower respectively earned the monikers of “bottle opener” and “hypodermic syringe” from the netizens.


From ‘Laughing Buddha’ to Water Dragon

At first glance, this Buddha statue, located in the Longhua Theme Park in Luoyang, Henan Province, appears to depict the monk Budai, also known as the Laughing Buddha, but closer observation shows what has made the golden likeness a point of controversy. The face is actually that of the park’s founder.

Public ridicule and disgust at the statue expressed online and offline led the park to remove the head, add dragons, and recast the Buddha’s rotund body as a gourd.


A Pile of Metal Sticks

Is it a bird’s nest? A beaver dam? A campfire? With nearly 200 million yuan ($30 million) invested in its construction, the appearance of the Hefei Art Gallery in Anhui Province is worth contemplation.

In fact, the design, by architect Meng Jianmin, was inspired by a popular Chinese children’s game, called “pick-up sticks,” in which a handful of straight sticks are released on a table and players score points by removing them without disturbing the others.

Denoting the presence of a tea factory in southwestern China’s 15-million strong city of Chongqing is a giant teapot suspended only by its neverending stream pouring into one of the four teacups placed about.

The innocent symbol was subject to unfortunate derision when the elements wore on the white outpour, turning it an unappetizing mossy color. Some likened it to feces, others more tastefully called it green tea.