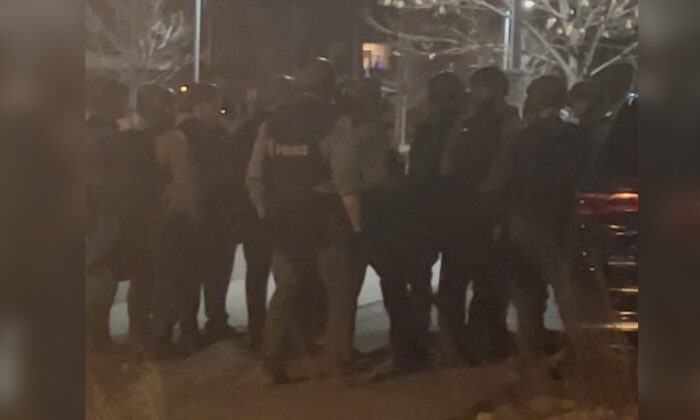 Officers gather in the street in Lakewood, Colo., on Dec. 27, 2021, in this still image taken from a social media video. (Hawk Hawkins/via Reuters)
Crime and Incidents

5 Dead After Shooter Opens Fire Across Denver and Lakewood, Colorado

Five people, including the gunman, were killed on Monday following a series of shootings in Denver and Lakewood, Colorado, police confirmed.

Law enforcement in Lakewood received a call of shots fired at a business just before 6 p.m., Lakewood Police spokesman John Romero said during a news conference.

The suspect, who has not been identified, fled on foot to a nearby shopping area where he “allegedly felony menaced another business with a firearm before then retreating to the Hyatt Place,” according to Romero.

“At that point, he did allegedly shoot one of the clerks there and that person was taken to the hospital. We do not know the extent of the injuries there or exactly how that person is doing,” Romero continued.

The suspect fled the area, at which point he then ran into police and fired at an agent, Romero said.

“That agent is currently at the hospital undergoing surgery right now. Fire was then exchanged again with our agents … and the shooter, in this case, was taken down.”

Romero added that authorities are still unsure as to whether the suspect’s death was as a result of police shooting or not but the suspect was pronounced dead at the scene. A SWAT team was sent to the area.

There is no longer a threat to the community, authorities said.

Officials believe the incident initially began in Denver with a “series of violent incidences,” the first of which occurred a little after 5 p.m., when three people were shot, leaving two adult women dead and one adult male injured, according to Denver Police Chief Paul Pazen.

Shortly after, one adult male was shot and killed at a second location near 12th Avenue and Williams Street. At a third location in Sixth Avenue and Cherokee Street, a gun was fired, but no injuries were reported, Pazen said.

“Also, Denver police officers identified a vehicle associated with this incident, there was a pursuit that ensued, there was an exchange of gunfire between the individual, the suspect, and our officers. Fortunately, our officers were not injured as a result of this incident. We believe that the individual, after disabling the police car, fled into Lakewood at that time.

“To recap, we have four significant locations where gunfire took place in the City and County of Denver,”  Pazen said.

In total, five people were killed, including the suspect, police said, adding that they have reason to believe the instances in Denver and Lakewood are connected.

One woman told CBS4’ Denver that they heard “popping” outside an Xfinity store before staff took customers to safety.

“We were just in there, my husband and I. You could hear the popping outside. It was like one shot and then maybe five or six more, and a couple more after that.

“Xfinity did an awesome job,” she said. “They swooped us right inside, got us in the back room and got the gates down. Fortunately, we didn’t see too much,” she said, adding that employees at the store were hit with shrapnel.

Police do not yet have a motive for the shooting.