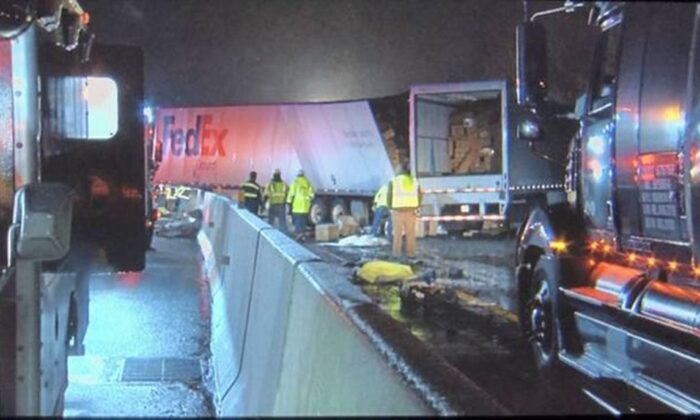 At least five people died and more than 60 were injured in a crash involving several tractor-trailer trucks on the Pennsylvania Turnpike on Jan. 5.

Officials said the crash occurred at around 3:30 a.m. local time near Mount Pleasant Township, which is southeast of Pittsburgh.

DeFebo, in a later statement, confirmed that five were dead and “about 60 patients” were taken to three nearby hospitals.

About 60 patients have been transported to three area hospitals in Westmoreland County due to multi-vehicle crash on @PA_Turnpike at milepost 86 westbound. Coroner has confirmed five fatalities. An 86-mile stretch of Turnpike still closed from New Stanton to Breezewood exits.

A 60-mile stretch between the New Stanton and Breezewood exits was closed, he said. The Turnpike completely reopened around 6:20 p.m local time.

National Transportation Safety Board investigators were called to the scene, DeFebo told the Tribune-Review.

County coroner Ken Bacha also told CNN that five people were found dead at the scene. At least 11 people were transported to Forbes Hospital in Monroeville, Pennsylvania, according to the report.

A spokesperson for the hospital said at least one victim was in critical condition, while 10 others were in fair condition. The ages of the patients are unknown.

Other details about the crash were not clear, including the cause.

The National Weather Service said the air temperature was just below freezing in Westmoreland County, with cloudy skies.

Traffic Deaths Down Across US

The fatality rate in 2017 was 1.16 million deaths per 100 million miles traveled—the second highest rate since 2008. “This is good news and bad news,” said Deborah Hersman, CEO of the National Safety Council, CNBC reported. “The total number of fatalities is not getting worse, but the situation is not getting better.”

“We know it’s happening, even though distracted driving data is hard to come by,” she said of drivers using smartphones while behind the wheel.

“Police reports on accidents often don’t report if the driver was distracted, and in many accidents, people don’t self-report themselves.”