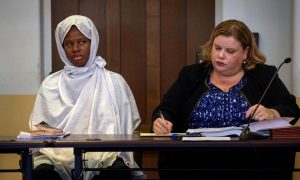 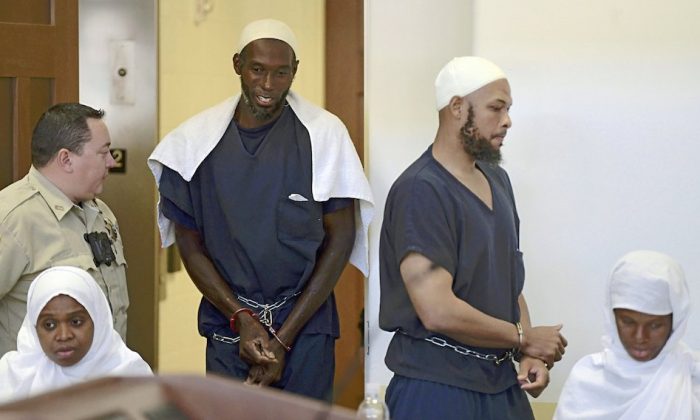 ALBUQUERQUE, N.M.—Five people arrested at a ramshackle New Mexico compound where one of the suspect’s sons was found dead pleaded not guilty on March 21, to federal terrorism-related charges and other counts.

The two men and three women have been charged with conspiring to support planned attacks on U.S. law enforcement officers, military members and government employees while living on the outskirts of Amalia, just south of the Colorado border.

They have been in federal custody since last August on firearms charges that accuse them of conspiring to provide weapons and ammunition to Jany Leveille, one of the five and a leader of the group who is from Haiti and had been living in the country illegally.

The group had traveled in late 2017 from Georgia to New Mexico, where they built their compound in an area dotted with some of the region’s signature “earthship” self-built homes.

Billy Blackburn, an attorney for Subhanah Wahhaj, and other defense attorneys said their clients are innocent of the charges.

The group’s makeshift settlement had consisted of a camping trailer wedged into the desert and surrounded by stacked tires before authorities raided it and found 11 hungry children, guns and ammunition, a firing range. They also found the remains of 3-year-old Abdul-Ghani Wahhaj, who had suffered from severe medical disabilities that caused seizures.

Happening Today: All 5 Taos County compound suspects are expected to go before a federal judge.

The boy had been reported missing in Georgia in late 2017 and died at the compound after he was denied medication because Leveille believed it suppressed Muslim beliefs, authorities said.

She and the boy’s father, Siraj Ibn Wahhaj, had held hours-long prayer rituals over the boy in the days leading to his death.

The results of an autopsy for the boy are still pending.

Federal statutes generally only allow for charging parents with abducting their own children in international cases.

Authorities also have accused Wahhaj and others of transporting weapons across state lines, and training children at a firing range on the property to carry out shootings and other attacks that never occurred.