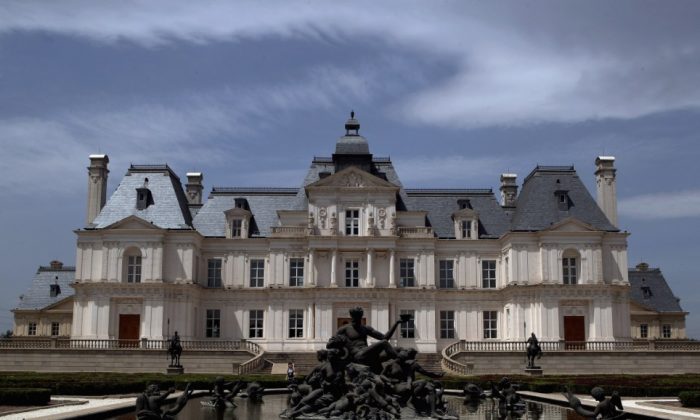 5 Chinese Replicas of Architecture From Around the World

Replicas of iconic landmarks from around the world have been (in)famously popping up throughout China, reflecting the marriage of the country’s real estate bandwagon in overdrive with a propensity for knock-offs.

Countless copies of varying scale and quality lie scattered through the country. Below are five.

In May 2014, a concrete replica of the 4,500-year-old Egyptian Sphinx was erected in Hebei Province, northern China. Standing over 60 feet and measuring about 200 feet in length, it is the same size as the original. It contains a two-story hall in the style of an ancient Chinese palace, and sits in a suburb of Shijiazhuang, the provincial capital.

Imitation may be the highest form of flattery, but Cairo was not pleased. The Egyptian government filed a complaint to the United Nations Educational, Scientific and Cultural Organization (UNESCO).

In response, the Chinese developer claimed that the copied Sphinx was simply part of a film shoot and would be torn down. However, the ersatz sphinx, which had already become a tourist attraction by the time Cairo levied its complaint, still stands.

As if to add just the right touch to the scene, a pyramid has been built near the Hebei Sphinx. But this time, it’s not Egypt that ought to be incensed. The new structure is a replica of the glass pyramid, designed by Chinese-American architect I.M. Pei., that stands at the entrance to the Louvre art museum in Paris.

Also in 2014, a building combining features of the White House and the Capitol Building appeared in the city of Fuyang, Anhui Province. The edifice was constructed beside a brewery and serves as a restroom for the 4,000 employees onsite.

The 4500-square foot restroom cost about $150,000 and immediately attracted online criticism in the form of comments decrying the blatant waste of money, and cheap imitation.

“We would have cried bloody murder for insulting China if the Americans built a restroom resembling Tiananmen Square,” one user wrote.

Some speculated that as the brewery is a state-owned, it must have been easy to acquire and spend the funds on a whim.

In Fuyang, it seems that replicas of American government buildings aren’t only used as fancy toilets. The local government office of the city’s Yingquan District also bears a strong resemblance to the White House. It reportedly cost 30 million yuan (about $5 million) to build, despite the entire annual district income being only around 100 million yuan.

Stay at a Chinese Chateau

The Château de Maisons-Laffitte lies on the Seine river in a Parisian suburb. Designed by François Mansart in 1651, it is a splendid representation of French baroque architecture.

Now there is a Chinese version, the “Zhang-Laffitte Chateau hotel,” built when a businessman scrounged together original blueprints of the building, 10,000 photos, and around $50 million to construct the replica in Changping, a city near Beijing that is quickly being incorporated into the sprawling capital. It even comes with a two-mile-long moat to make up for the missing Seine.

But apparently not everything about the chateau could be reproduced.

“The color of the sky is different,” one online comment says. “How nice if we could replicate the blue sky!”

Beijing and much of China suffers from severe air pollution, which usually manifests in grey skies and irritating smog.

The Hills Are Alive… in China as in Austria

In 2011, the people and authorities in the lakeside Austrian town of Hallstatt got wind of the fact that their city was being copied and reconstructed in southern China to an extraordinary degree of accuracy.

The construction cost close to $1 billion and includes all of the major buildings that characterize the real Hallstatt, such as a clock tower. At several hundred thousand dollars apiece, villas in the Chinese construction are far more expensive than the real houses in Austria, and well beyond the reach of locals. They are intended for the nouveau-riche of Huizhou, the city where the town is located.

Like the Egyptians, residents of the original Hallstatt were appalled to hear that their home had become the inspiration for Chinese real estate kitsch, and considered filing a complaint to UNESCO. The suit was called off, however, when the town leadership realized the enormous tourism potential the Chinese construction could get them.

In 2012, Hallstatt mayor Alexander Scheutz personally attended the opening ceremony of the Chinese copy and signed a cultural exchange agreement. As predicted, thousands of Chinese who had previously never heard of the town were drawn to visit the real thing in Austria.

A Chinese Entrepreneur’s Rude Awakening at a German Manufacturing Fair

Statues, castles, and towns are one thing, but Chinese developers met their match when they tried to copy the Manhattan skyline.

Complete with imitation imitation Rockefeller and Lincoln Centers, as well as a Hudson river of its own, the Yujiapu development area in the port city of Tianjin stands unfinished and empty after years of construction and $50 billion of wasted investment.

Yujiapu was intended to become the world’s largest financial center and the pearl of the eight-million strong Tianjin. A high-speed rail link was planned to connect it with Beijing, which stands to the northwest, and the municipal government hoped that the 164 million square feet of office space would stimulate residential growth in the surrounding districts.

But instead of rushed businessmen and heavy traffic, only massive weeds and floodwater (the land here is almost parallel to the sea) fill the streets of this urban graveyard. Heavily in debt, the developers have virtually no chance of finishing their project, which was originally slated to open in 2019.

The fate of Yujiapu is one that looms heavy over Chinese developers nationwide as demand for real estate falls far behind the overheated trends in supply.