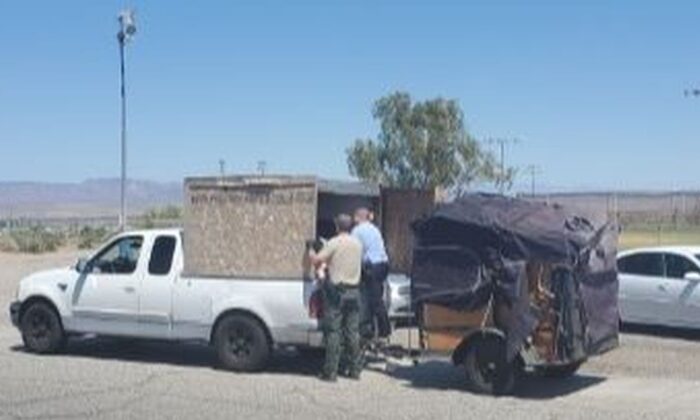 Police in California arrested three people on child endangerment charges this week after five children were found in the bed of a pickup truck in sweltering weather. (San Bernardino County Sheriff’s Department)
US News

Police in California arrested three people on child endangerment charges this week after five children were found in the bed of a pickup truck in sweltering weather.

Officials said that the children didn’t have ventilation or water.

The San Bernardino County Sheriff’s Department wrote that deputies responded to a call near Interstate 40 at a rest stop near Needles, California. They then found the children, aged one to 13, inside a wooden box inside a pickup truck bed.

“The victims were left unrestrained in the truck bed with no ventilation, water or air conditioning and outside temperatures were around 100 degrees,” officials said in a news release.

Zona Brasier, 39; Kenneth Standridge, 40; and Aushajuan Hardy, 41; were arrested on child endangerment charges. They are all residents of Sacramento, officials said.

The sheriff’s office wrote that “illegal narcotics, drug paraphernalia, and a shotgun were also located” inside the truck, although it’s not clear where.

The San Bernardino County Children and Family Services is now caring for the children, whose conditions are not known, according to a spokesperson for the agency, the East Bay Times reported.

Other details about the incident are not clear. Needles is located near the Arizona-California border.

Anyone with information regarding the incident is urged to contact Detective Brandon Abell or Detective Tim Preston at the Colorado River Station at (760)326-9200.