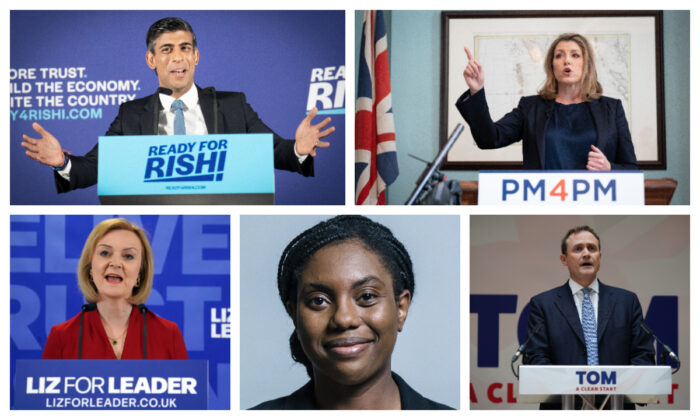 All five remaining contenders vying to be the UK’s next prime minister will take part in the first televised debate on Friday on Channel 4,  the network has confirmed.

Rishi Sunak, Penny Mordaunt, Liz Truss, Kemi Badenoch, and Tom Tugendhat are expected to stand toe to toe in three debates over the weekend, ahead of the third ballot scheduled on Monday to further narrow the field.

Sunak, the former Chancellor whose resignation helped trigger the collapse of Prime Minister Boris Johnson’s government, remains the frontrunner after two rounds of eliminations, with 101 votes, 18 votes ahead of runner-up Penny Mordaunt—a much narrower lead than in the previous two leadership elections.

In 2019, Johnson led with 114 votes after the second ballot, compared to 43 votes for Jeremy Hunt, who came in second.

Sunak and Mordaunt are also facing stiff competition from Truss. The foreign secretary secured 64 votes on Thursday but now has the backing of Attorney General Suella Braverman, who was knocked out of the race with 27 votes.

Braverman, who called herself “the only authentic Brexiteer” candidate, said Truss is “the best person to unleash the opportunities of Brexit, and deliver much-needed tax cuts.”

“I’m confident she will defend free speech, champion equality of opportunity, and take a robust line on illegal immigration,” she added.

Truss is expected to draw many of Braverman’s supporters.

According to leaked messages shared on Twitter, Mark Francois, chair of the Eurosceptic group European Research Group (ERG), urged MPs in the group to back Truss, but the message met resistance from another MP who argued Badenoch is the best person to lead the party into the next general election.

After securing 49 votes on Thursday, Badenoch said she was “delighted” that MPs believed her vision “for a return to honest politics and conservative principles.”

“Now is the time for change and I am looking forward to continuing to make that case in the TV debates,” she wrote on Twitter.

Former Brexit minister David Frost on Friday urged Badenoch to “stand down in return for a serious job in a Truss administration.”

But Badenoch’s spokesman said: “Kemi has brought interesting ideas and a new approach to this leadership contest. She is looking forward to the debates this weekend.

“She has no intention of stepping down and is in it to win.”

Tugendhat, former soldier and chair of the Foreign Affairs Committee, is currently bottom of the league with 32 votes.

Being the only candidate who has not served in Johnson’s government, Tugendhat argued he can bring “a clean start” to the party.