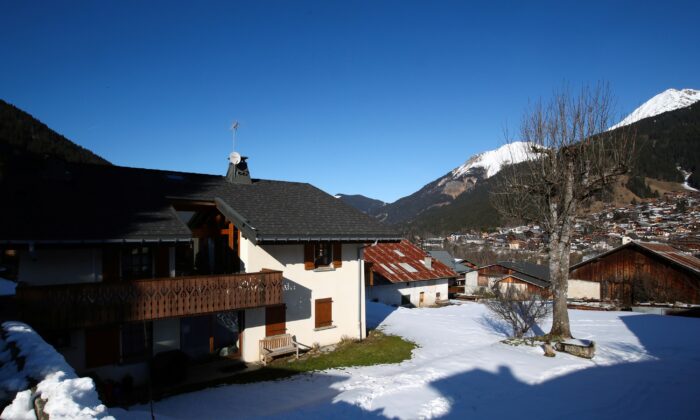 A view of the house where five British nationals including a child, who have been diagnosed with the coronavirus after staying in the same ski chalet with a person who had been in Singapore, were staying at the French Alpine resort of Les Contamines-Montjoie, France on Feb. 8, 2020. (Denis Balibouse/Reuters)
The World

Five British nationals including one child tested positive for the new coronavirus after staying at a ski chalet in France, health officials said on Saturday.

The five people were staying in the same accommodation as a British man who was in Singapore from Jan. 20 to Jan. 23. That man became infected with the coronavirus.

After arriving in France on Jan. 24, the man stayed in the chalet in Contamines-Montjoie in eastern France, according to Agnes Buzyn, France’s health minister.

“Those positive cases and the contacts this British national had with others—11 British people in total—were all staying in the same chalet and were hospitalized during the night in four hospitals, the university hospitals of Lyon, Saint-Etienne, and Grenoble,” Buzyn said at a press conference. “They are not in a serious clinical condition.”

The total number of people infected with the virus in France has now reached 11.

The six others include one man in a serious condition; the others have shown signs of improvement in recent days, according to medical officials. Regional health official Jean-Yves Grall told a televised news conference later Saturday that two schools near the ski resort were being closed.

He said that the 11 who were hospitalized include three children, including a 9-year-old who recently spent time in a school in Contamines—a mountain village of which he was also a resident—as well as in another establishment where he attended French lessons.

The French government has been in touch with Singapore and the United Kingdom, and Singaporean authorities are looking into a business congress that took place in a hotel there, the Grand Hyatt Hotel, from Jan. 20 to Jan. 23.

The British man now known to be at the origin of the latest French outbreak had traveled to that meeting, according to health officials in Singapore, which recently raised its coronavirus alert to SARS level. Multiple other cases have been linked to the meeting, including a 41-year-old Malaysian man and two South Koreans.

Based on advice from the Scientific Advisory Group for Emergencies, the UK’s chief medical officers advised Thursday that anyone returning from Singapore, Japan, Thailand, South Korea, Malaysia, Taiwan, Hong Kong, or Macau, as well as mainland China, should immediately stay inside and avoid contact with people and contact the National Health Service if they have symptoms of a cough, a fever, or experience shortness of breath.

People should do so even if symptoms are mild, the officers said.

“These areas have been identified because of the volume of air travel from affected areas, understanding of other travel routes and number of reported cases. This list will be kept under review,” the UK government said in a statement.

There are three confirmed cases in the UK.

The infections in France came as two foreigners, a Japanese national and an American, died in Wuhan from the new virus. The Japanese man was in his 60s, the Japanese Foreign Ministry said, while the American was 60.

The new virus started in Wuhan, a city of some 11 million in China, and the vast majority of cases have been in the country. A growing number of cases have been confirmed outside of China, with patients testing positive in more than two dozen countries.