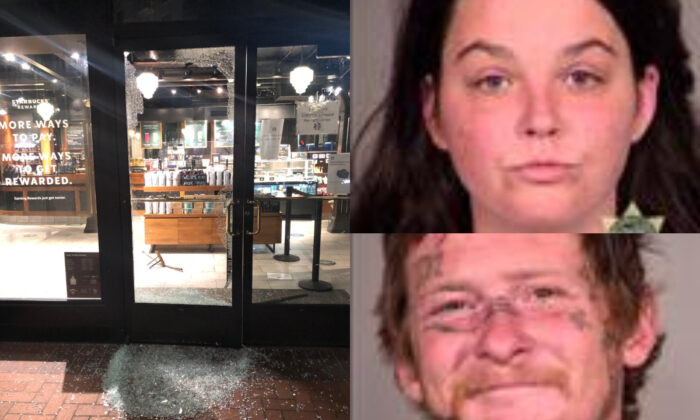 (L) Damage to a business inflicted by rioters. (R) Two of those arrested during the rioting, Elizabeth Hall and Jacob Myers, are pictured in mugshots. (Portland Police Bureau; Multnomah County Sheriff's Office)
Crime and Incidents

Five people were arrested overnight in Portland, Oregon after a riot broke out on the anniversary of George Floyd’s death.

The quintet was part of a crowd who set a fire in a dumpster next to the Justice Center, a building that houses a jail and law enforcement offices, while chanting “Burn the building down,” according to a Portland Police Bureau incident summary and photographs and video footage from the scene.

Others in the crowd hurled frozen water bottles and eggs at police officers and some threw metal spikes into the road.

The mob later marched to City Hall, breaking windows and scrawling far-left slogans across the facade. The mob was “incited” by some people, police said.

Because of the continued criminal actions, police declared a riot and warned people to disperse or face arrest or crowd control tactics.

The crowd kept moving through the city, damaging property at businesses and breaking more windows, including at a steakhouse where people were eating inside.

“Slowly, as the number of people in the crowd became smaller and smaller, they began to spread out, fight among themselves and light occasional trash can fires. People within the crowd were overheard saying the night was a success,” police said.

The crowd on Tuesday night was largely dressed in garb favored by Antifa, the far-left, anarcho-communist network that advocates for the abolition of police and has frequently targeted Portland Mayor and Police Commissioner Ted Wheeler.

Wheeler has in recent months turned against the rioters, describing them as anarchists who are bent on destruction and calling for community members to help “unmask them” so they can be arrested and prosecuted.

Portland has dealt with unrest for about a year, starting with the death of Floyd in Minneapolis. Rioters set fire to the Justice Center in the spring of 2020 before turning their sights on the U.S. courthouse downtown, triggering the deployment of federal officers. Nightly clashes between the rioters and officers played out for weeks until the feds withdrew, letting a combined city-state force respond to unrest.

Riots have continued taking place on a regular basis.

Antifa members promoted the gathering that turned into a riot on Tuesday, according to Andy Ngo, an editor for The Post Millennial who is an expert on the group. One poster promoting the gathering called for people to “bloc up,” a reference to wearing all-black clothing with faces obscured and to be ready to carry out destruction.

Millar-Griffin was arrested during a riot in August 2020 on disorderly conduct and law enforcement interference charges.

Huber has described himself on social media as an independent reporter. He has previously shared a meme calling for the resignation of Wheeler.