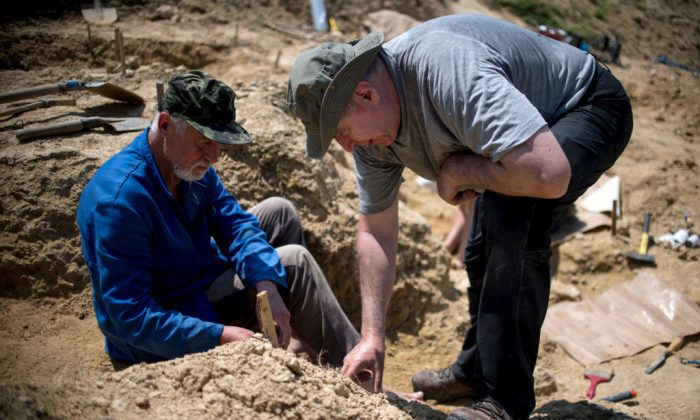 Professor Nikolay Spassov (R) works near the site where a fossilised tooth with three roots was found in 2002, near the village of Rupkite, central Bulgaria, on June 07, 2017. (NIKOLAY DOYCHINOV/AFP/Getty Images)
Science

Human footprints were found imprinted an ancient seashore fossilized beneath the Greek Island of Crete. The find threatens to rewrite what all scientists currently know about human development. The finding comes after other recent European finds that question whether Africa indeed hosted the earliest humans.

The Crete fossil is 5.7 million years old. The finding doesn’t conform to the beliefs of scientists who follow evolutionary theory. The Crete fossils are human footprints, not those of apes, as News.com.au.reported. It would mean humanity has a much older origin than first thought, and also opens up a different line of development, taking place at an earlier time and a different place on Earth than would conform to pre-existing theories.

The unique shape of the footprints found in Crete reflect a foot that supports upright-standing human beings. The long sole, short toes, one big toe, distinctive foot ball, and absence of claws of this print are undeniably human. If this was a print of a great ape it would more likely resemble a human hand.

The find raises eyebrows since it indicates humans were on Earth earlier than previously thought, and that humanity’s origins may not rest in Africa, or at least for the discoveries of older fossils found outside Africa. It could indicate a lot more and hint at multiple lineages of human ancestry.

What scientists previously thought were that the 3.7 million-year-old human footprints found in Tanzania represented the earliest finds. But even those prints are believed to be more from an ape-like creature than a human being.

The prints were discovered by Polish Geological Institute paleontologist Gerard Gierlinski, while he was on a Crete vacation in 2002. The prints have undergone over a decade of study since then.

The prints were made when Crete was still a part of the Greek mainland. The age of the footprints were analyzed using foraminifera, a method to analyze marine microfossils, as well as the position of the prints in the sedimentary layer where they were found. That sedimentary layer was created when the Mediterranean Sea dried up 5.6 million years ago.

As The Telegraph reported, another other recent paleontological discovery blowing the minds of scientists are the 7.2 million-year-old fossil finds in another part of Greece and in Bulgaria that have undergone a reclassification as belonging to a family of pre-human ancestors, also disrupting the concept of Africa as the earliest or only origin of humanity.

Despite the continuing discoveries, there are still scientist who reject any notion of Europe holding humanity’s origins.