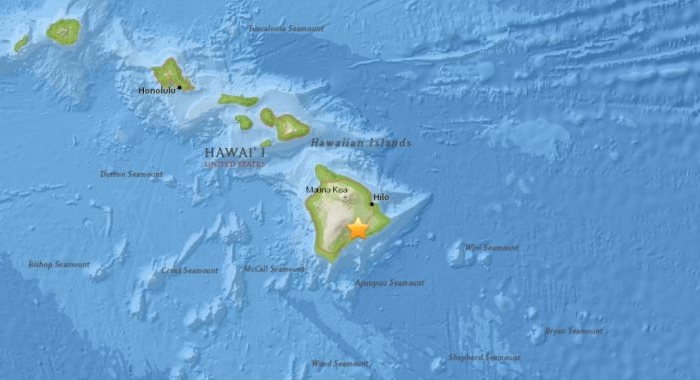 A 5.3-magnitude earthquake was recorded near Hawaii’s Kilauea volcano on Wednesday, according to the U.S. Geological Survey.

The quake, termed a “volcanic eruption” by the USGS, was recorded about 3 miles west-southwest of the volcano at around 5:45 a.m. local time, the agency said. It had a depth of less than 0.6 miles.

“This earthquake was associated with a minor explosion and rockfall that occurred” before 6 a.m., the USGS said.

“No emissions were observed above the crater,” it added.

Hawaii News Now reported that small earthquakes are building up until an ash explosion takes place at the summit.

“Following the explosion at the summit, the seismicity will sharply drop off, and then gradually begin to build up as we approach the next summit explosion,” said Alex Demas of the USGS in the report. He said these aren’t like normal earthquakes.

“So as long as the summit explosions continue, there likely will be earthquakes and ground shaking associated with the explosion,” he said.

There have been numerous quakes near the summit, including a 6.9-magnitude quake that shook the island on May 4.

Meanwhile, lava from the volcano has destroyed two more houses at Kapoho Beach Lots, leaving just one house standing in the area, according to the Hawaii Tribune-Herald.

The official count of homes destroyed by the current eruption stands at around 700, the report said.

The Hawaiian Volcano Observatory said that fissure No. 8 on Kilauea has persisted in being very active and is feeding a lava channel that goes to the ocean at Kapoho.