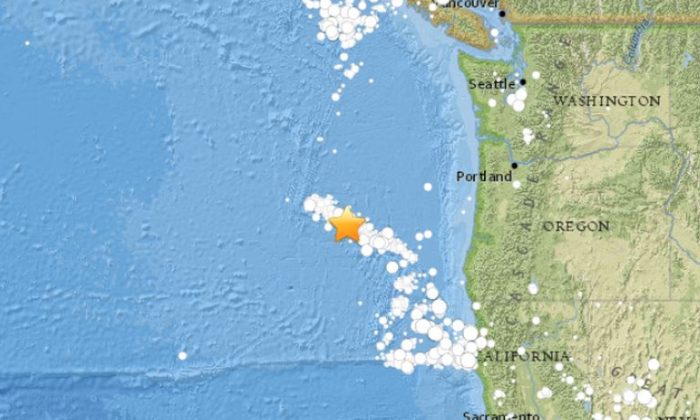 A 5.3-magnitude earthquake struck off the coast of Oregon on Sunday morning, followed by a 4.4-magnitude quake. (USGS)
US News

A 5.3-magnitude earthquake struck off the coast of Oregon on Sunday morning, followed by a 4.4-magnitude quake in the same area about 40 minutes later, according to the U.S. Geological Survey.

The National Weather Service’s Tsunami Alerts Twitter page said that a “tsunami [is] not expected” after the 5.3 quake on Sunday.

The 5.3-magnitude quake struck at a depth of around 6 miles. It was located about 232 miles west from Coos Bay and 227 miles west from Charleston. Both are located in southern Oregon, said the agency.

On Tuesday morning, the USGS said that 11 quakes ranging from 2.8 to 5.6 magnitudes were reported off the Oregon and California coastline. They were clustered some 125 miles west of Crescent City, California, according to OregonLive.

Don Blakeman, who works as a geophysicist at the National Earthquake Information Center, told OregonLive that the magnitudes of the tremors haven’t yet been serious. Quakes of this caliber occur fairly often in the Pacific Ocean near the West Coast of the United States, he said.

He said that officials aren’t worried about a tsunami unless a magnitude-7 earthquake is reported.

The earthquakes took place along Juan de Fuca tectonic plate. Blakeman did note that the plate will be the likely source of a large earthquake in the Seattle and Portland area in the future, but nobody knows exactly when.

Meanwhile, Oregon, California, and the rest of the U.S. West Coast are located on the seismically active “Ring of Fire” located within the basin of the Pacific Ocean. It’s lined with around 75 percent of the world’s active volcanoes. The USGS says that about 90 percent of the world’s earthquakes take place along the ring.