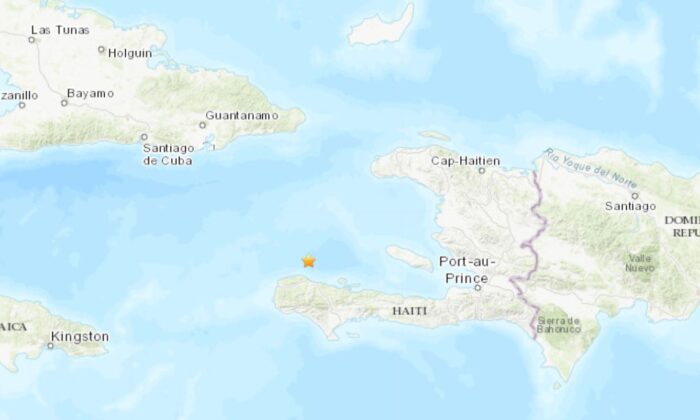 Map photo of the 5.1 quake that happened near Port-Au-Prince in southern Haiti on March 23, 2022. (USGS/Screenshot via The Epoch Times)
International

PORT-AU-PRINCE, Haiti—An earthquake with a preliminary magnitude of 5.1 struck in Haiti on Wednesday close to an area still struggling to recover from a deadly tremor that hit last year.

There were no immediate reports of deaths or serious injuries. Frankel Maginaire, a reporter for Radio Caraïbes in Jeremie, told The Associated Press that some minor injuries happened as people panicked and started running. Some people also said walls that were damaged in the 2021 quake collapsed.

A spokesperson for Haiti’s Civil Protection Agency could not be immediately reached for comment.

The quake was centered 11 miles (18 kilometers) north of Jeremie at a shallow depth of six miles (10 kilometers), the U.S. Geological Survey said. Jeremie is at the tip of Haiti’s southern region.

A magnitude 7.2 quake that struck southern Haiti in August 2021 killed more than 2,000 people and destroyed or damaged tens of thousands of homes. Dozens still remain in temporary shelters and aid has been scarce because gangs continue to control the main road that leads from the capital of Port-au-Prince to Haiti’s southern region.