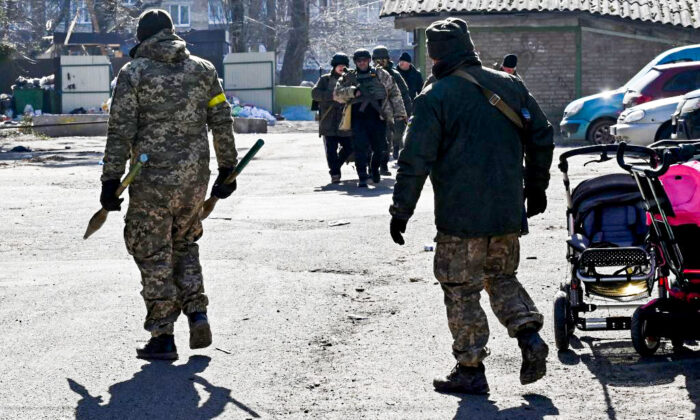 4th Round of Ukraine–Russia Talks Paused

The fourth round of negotiations between Ukrainian and Russian delegations on a possible ceasefire has been paused until March 15, an adviser to the Kyiv government has announced.

“A technical pause has been taken in the negotiations until tomorrow,” the adviser, Mykhailo Podolyak, wrote in a March 14 Twitter post. “For additional work in the working subgroups and clarification of individual definitions. Negotiations continue.”

A day earlier, Russian and Ukrainian officials said there appeared to be signs of a possible deal on a ceasefire in the near future, although few details were provided. The previous round of negotiations yielded few results.

“According to my personal expectations, this progress may grow in the coming days into a joint position of both delegations, into documents for signing,” Russian negotiator Leonid Slutsky, a member of the state Duma, told state-run media on March 13. Podolyak said Moscow “started to talk about something and not just throw out ultimatums.”

Amid the March 14 talks, Ukrainian President Volodymyr Zelensky separately announced that he plans to give a virtual address to the U.S. Congress on March 16. He’s expected to again call for a no-fly zone over Ukraine, although top officials in the Biden administration and NATO have repeatedly rejected that suggestion.

“Provide us with all necessary weapons,” Kuleba said. “Apply more sanctions on Russia and isolate it fully. Help Ukraine force [Russia] into failure, and you will avert a larger war.”

Since the start of the conflict on Feb. 24, more than 2.8 million people have fled Ukraine into neighboring countries including Poland, Slovakia, Hungary, Romania, Moldova, Russia, and others, according to the U.N. refugee agency.

“People continue to flee the war in Ukraine every minute,” the agency wrote on Twitter on March 14, noting that they need “continued support.”

Before the talks were held, air raid alerts sounded in cities and towns around the country early on the morning of March 14 as Ukrainian officials said Russian forces shelled several suburbs of Kyiv, Ukraine.

Through state-run Sputnik News, Russian Ambassador to the U.N. Vassily Nebenzia said on March 14 that Moscow believes Ukrainian forces are “actively preparing for provocations with the use of chemical substances in order to accuse Russia of reportedly using chemical weapons,” claiming that “Ukrainian nationalists transported to Zolochiv to the northwest of Kharkov about 80 tons of ammonia.”

Neither Ukrainian nor U.S. officials issued public comments on the recent Russian claim of a chemical false flag attack. Previously, White House officials have said that the allegations are “preposterous” and “total nonsense,” and they’ve said that it’s Moscow that’s preparing to use chemical weapons.

“Allegedly, we are preparing a chemical attack,”  Zelensky said late last week. “This makes me really worried because we’ve been repeatedly convinced: If you want to know Russia’s plans, look at what Russia accuses others of.”