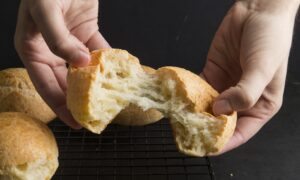 These Cheesy Rolls, Originally From Brazil, Are Easy to Make in Your Own Kitchen
0
Share Now
TelegramFacebookTweetEmailTellMeWeReddit
Copy Link
Life & Tradition

After photos were posted, police received numerous phone calls from across US
By Jack Phillips

A user allegedly posted photos of his dead girlfriend on the imageboard 4chan on Tuesday night, telling others on the site to check the news “in a few hours.”

UPDATE: Reports on Wednesday said David Kalac, 33, was the suspect in the murder of Amber Lynn Schraw, 30.

The photos–posted on the site’s /b/ section–show a nude woman lying on a bed, captioned: “Turns out its way harder to strangle someone do death than it looks in the movies.”

KIRO-7 in Seattle reported that police are now investigating a death in Port Orchard, which is located across the Puget Sound from Seattle.

Kitsap County Sheriff’s Office Deputy Scott Wilson said that police are investigating the images posted on 4chan, via NBC News.  “We do not believe this is a random assault,” he said. “We believe this person was targeted by a yet-to-be determined other person.”

Wilson added: “Any time we have images of this graphic nature that are posted on social media, and purport to be this crime scene, we are going to take those seriously. But we are unable to confirm whether those photographs are of this victim right now.”

The victim is a woman believed to be in her 30s, and she was found by a family member, the report said.

“Check the news for Port Orchard Washington in a few hours. Her son will be home from school soon. He’ll find her, then call the cops. I just wanted to share the pics before they find me. I bought a BB gun that looks realistic enough. When they come, I’ll pull it and it will be suicide by cop. I understand the doubts. Just check the f—— news. I have to lose my phone now,” the user said in the post.

As a result of the attention, some 4chan users were saying it will mark “end” of the site.

Users were reposting this: “Do you realize the [expletive]storm thats going to rain down on this website once the mainstream media and feminist jews get winds that some anon murdered this chick for our entertainment, you [expletive] have officially [expletive] this website for good.”

Officials told KIRO that her car went missing, and it was described as a 2001 Ford Focus with black wheel rims and a WA license 495-YLY.

The report didn’t give the woman’s name. The 4chan user who posted the graphic images didn’t say anything else.

On 4chan’s /b/ section, there were numerous threads about the alleged murder.

The person who posted the original thread apparently started another one showing a photo of a Washington state license while holding a knife (seen above in the photo), but it’s unclear if it’s actually him.

Some users were claiming the suspect’s name is “Ryan Mitchell,” but that seems very sketchy at this point. They also posted the alleged victim’s Facebook, named “Amber Lynn” of Port Orchard.