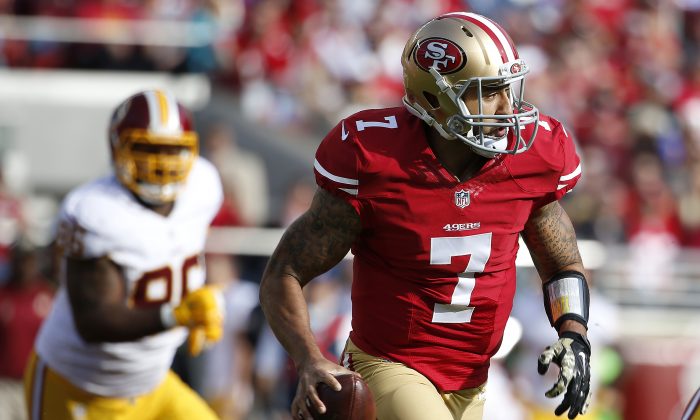 There’s been criticism against Kaepernick that he hasn’t made enough progress as a passer.

“He’s a great player,” Harbaugh said on Sunday, per SI.com. “I don’t know how everybody else doesn’t see it that way. Great with a capital ‘G’—at the highest level of great.”

Meanwhile, Harbaugh described his career as a quarterback as “mediocre.”

“I’ll throw to whoever is open,” he told the Contra-Costa Times.

And regarding Sherman’s matchup with receiver Michael Crabtree, Kaepernick said, “It’s another game for him. I don’t think he’s worried about anything else.”

And he said he doesn’t have any opinions on Sherman.

It’s unclear if Davis will be able to play against the Seahawks on Thursday, he added, via the SF Chronicle.

Davis received a concussion during the NY Giants game on Nov. 16. However, he’s missed six games due to a number of different injuries this season.

Anquan Boldin had some choice words for Redskins coach Jim Haslett after he got in the receiver’s face following a 10-yard catch.

After the catch, Boldin fell out of bounds and onto the Redskins sideline. He shoved player off of him, prompting Haslett to get in his face.

“It looked like Jim Haslett had some words for you on the sideline; what was that about?” a reporter asked Boldin after the game, according to the Washington Post.

“I don’t know,” Boldin replied. “A guy tried to hit me late on the sideline, and I pushed him off. [Haslett] had some words, for whatever reason. I don’t even give that a second thought. He don’t….he’s irrelevant.”

It’s unclear if he was referring to Haslett’s career or the impact the incident had in the game. According to the Post, Boldin didn’t appear to angry over the matter.