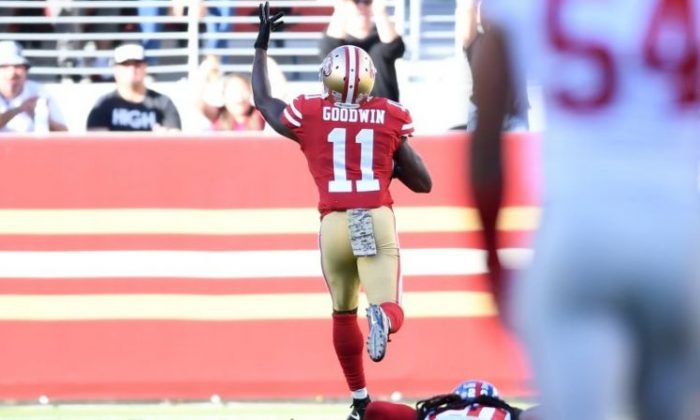 Marquise Goodwin #11 of the San Francisco 49ers breaks a tackle from Janoris Jenkins #20 of the New York Giants on his way to an 83-yard touchdown against the New York Giants during their NFL game at Levi's Stadium in Santa Clara, California, on Nov. 12, 2017. (Thearon W. Henderson/Getty Images)
NFL

San Francisco 49ers wide receiver Marquise Goodwin caught an 83-yard touchdown pass in Sunday’s game against the New York Giants, an incredible feat that was bittersweet after he received the news his pregnant wife lost their baby boy due to complications during pregnancy.

“Unfortunately, we lost our baby boy due to some complications, and had to prematurely deliver him early this morning around 4 a.m.,” he wrote.

“Although we are hurt, I am grateful for the experience and grateful that God blessed me with a wife as courageous and resilient as Morgan,” Goodwin said on Instagram. “The pain (physically, mentally, & emotionally) that she has endured is unbelievable. Please Pray for the Goodwin family.”

When he caught the touchdown pass from quarterback C.J. Beathard, Goodwin also appeared to note it during his celebration.

According to NBC Sports Bay Area, Goodwin left the locker room quickly after Sunday’s game to join his family.