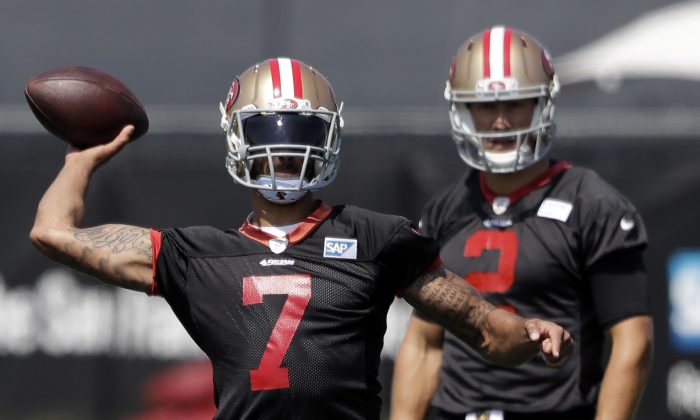 San Francisco 49ers quarterback Colin Kaepernick will get one more chance to impress coach Chip Kelly before the team announces whether he'll be the starter or not. (AP Photo/Marcio Jose Sanchez)
NFL

And time will tell what the 49ers coach decides if and when backup Colin Kaepernick gets back to his ideal playing weight and finds a groove following surgeries on his non-throwing left shoulder, left knee and right thumb.

After a commanding 28-0 Monday night win against the Rams in Week 1, Gabbert and San Francisco lost 47-26 Sunday on the road to Cam Newton and Carolina.

“He’s our starter and I’ve got a lot of confidence in Blaine,” Kelly said Monday. “So, we’re not thinking or talking about not having Blaine in there. It’s about everybody on offense playing better right now.”

While Gabbert threw for 243 yards and two touchdowns, he also tossed a pair of late interceptions and was sacked twice. And it hardly gets any easier this week.

San Francisco (1-1) is going to the hostile confines of CenturyLink Field to face the nemesis Seattle Seahawks and their experienced, staunch secondary — a group of defensive backs far more experienced than what the Panthers possess.

Kaepernick, meanwhile, continues to regain his strength with an aim of returning to his previous playing weight of about 225 pounds, though Kelly isn’t sure how close he is to that number right now. Kaepernick, whose decision not to stand for the national anthem has been one of the NFL’s biggest stories, wasn’t able to lift weights for much of his time rehabbing from the three surgeries.

“It’s not something that’s going to happen overnight,” Kelly said. “He’s not going to get to 225 in a week. If you are, it’s not going to be a good 225. It’s about building himself back up, and you can see kind of where he’s comfortable in terms of being able to play. It’s something that he’s working extremely hard at. It’s just, you can’t force that issue.”

Tackle Anthony Davis is in the NFL’s concussion protocol after sustaining a head injury during Thursday’s practice, which was the lone session of the week in pads. He did not travel to North Carolina with the team.

Davis, who turns 27 next month, retired in June 2015 after his previous season was affected by a concussion that left him “loopy.”