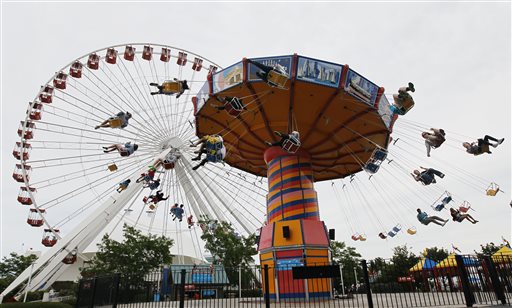 In this June 13, 2012 photo, visitors ride on the Ferris Wheel and Wave Swinger at Chicago's nearly century-old Navy Pier. Clinton Shepherd, park operations manager at the Navy Pier, rode the tourist spot’s Ferris wheel for more than 2 days over the weekend of May 18-19, 2013, bringing the world record for the longest ride to the birthplace of the amusement park favorite. (AP Photo/Charles Rex Arbogast, File)
US

Sheperard spent 48 hours in a gondola on a ferris wheel at the pier, beating the previous record of 25 hours.

“It was a very overwhelming experience,” Shepard told the Chicago Sun-Times after he finished.

Guinness let Shepard have a five-minute break every hour, and local restaurants brought food for him throughout the ride.

“Once I realized Navy Pier, my friends, my family and the city of Chicago had my back and wanted me to complete this, it became easy,” he said. “I was thrilled and honored to be able to have all the love and support I did.”