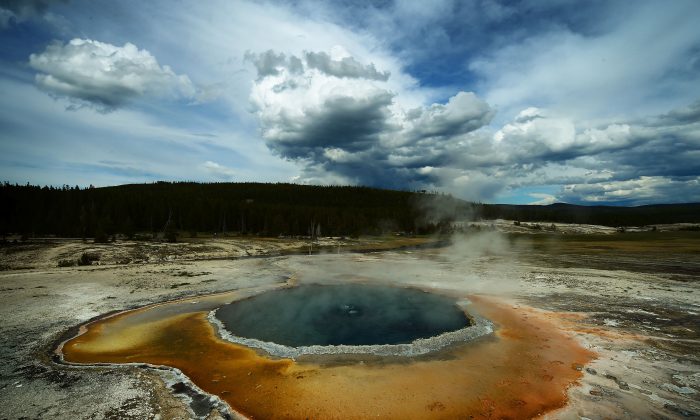 View the Crested Pool hot spring in the Upper Geyser Basin of Yellowstone National Park in Wyoming, on May 14, 2016. (Mark Ralston/AFP/Getty Images)
Environment

The Yellowstone national park has been shaken by 464 earthquakes between June 12 and June 19, with the strongest reaching a magnitude of 4.4 on June 16, according to the University of Utah Seismograph Stations statement.

The swarm of earthquakes is the largest in five years and has reignited speculation on the danger of the massive volcano, which sits under the national park, exploding.

The Yellowstone National Park sits on a supervolcano that is capable of causing widespread destruction across North America. If a “supereruption” occured, ash would cover the whole of the United States, with 1-3 millimeters furthest out along the East Coast, according to the Yellowstone Volcano Observatory (YVO), 0.4-1.2 inches on the West Coast, and 0.4-1.2 feet as far as Denver. Near the epicenter, large swaths of Wyoming, Montana, and Idaho would be covered by more than 3 feet of ash.

The YVO predicts an explosion would be preceded by more dramatic signs.

“Yellowstone hasn’t erupted for 70,000 years, so it’s going to take some impressive earthquakes and ground uplift to get things started. Besides intense earthquake swarms (with many earthquakes above M4 or M5) we expect rapid and notable uplift around the caldera (possibly tens of inches per year),” YVO stated.

Moreover, the volcano may just end up spewing lava without releasing the huge amounts of ash that would cause destruction beyond the park limits.