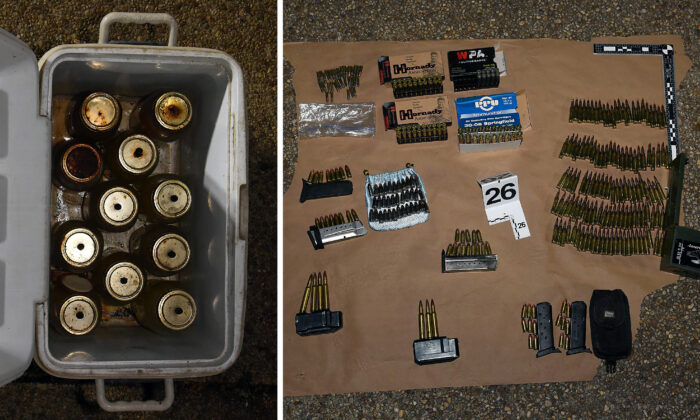 Police seized 11 Molotov cocktails and hundreds of rounds of ammunition from the truck of Lonnie Leroy Coffman of Falkville, Ala., near the U.S. Capitol on Jan. 6, 2021. (U.S. Department of Justice/Screenshots via The Epoch Times)
Crime and Incidents

46 Months in Prison for Alabama Man Found With Molotov Cocktails, Firearms, and Machetes on Jan. 6

An Alabama man who brought Molotov cocktails and a cache of weapons and ammunition to Washington on Jan. 6, 2021, was sentenced on April 1 to 46 months in prison, followed by three years of supervised release.

U.S.District Judge Colleen Kollar-Kotelly said she was frustrated at not getting a good explanation for why Lonnie Leroy Coffman, 72, of Falkville, Alabama, drove to the country’s capital in a pickup truck loaded with firearms, incendiary devices, and other weapons.

It’s “a serious offense, and I can’t get away from it,” Kollar-Kotelly said. “I mean, he had almost a small armory in his truck, ready to do battle. And I still don’t have an explanation of why you would have all of this.”

Coffman will get credit for time spent in pretrial detention, meaning he’ll serve about 31 more months in prison.

“The defendant transported these weapons across state lines and left them unsecured in his pickup truck. The pickup was parked in a part of Washington D.C. close to residences and government buildings, including the U.S. Capitol building.”

According to court records, Coffman parked his red GMC Sierra pickup truck in the 300 block of First Street at about 9:15 a.m. on Jan. 6. He walked from there to the site of President Donald Trump’s rally at the Ellipse. At the time, Coffman was armed with a 9mm handgun and .22-caliber revolver, according to prosecutors.

Coffman came to the nation’s capital on Jan. 6 to find out more about alleged fraud in the November 2020 presidential election. After Trump’s speech, Coffman returned to his truck, but found that the Capitol Police had streets blocked off because of suspected pipe bombs found at both the Republican and Democrat party headquarters.

Coffman spent part of the day with a woman whose car was also behind the police perimeter. She said she felt sorry for him because he was cold and couldn’t access his truck. The pair took public transportation to Pentagon City, where they ate pizza and warmed themselves. Coffman didn’t go to the U.S. Capitol.

Police Made Bomb Sweep Nearby

Police doing a sweep of the area near Coffman’s truck because of the pipe bombs noticed a firearm on the truck’s front seat. During a search of the vehicle, police found a 9mm handgun, an M4 rifle, a shotgun, hundreds of rounds of ammunition, high-capacity magazines, a crossbow with bolts, machetes, camouflage smoke devices, and a stun gun.

In the pickup’s covered bed, police found a cooler containing 11 Mason jars filled with gasoline and melted polystyrene foam. When ignited, the liquid would have a similar effect to napalm, according to federal agents.

Holes were punched in the lids, and the holes were plugged with golf tees. The truck also contained cloth rags and lighters for making and lighting Molotov cocktails, court records state.

Police also recovered a handwritten list of individuals with names and descriptions, such as “billionaire leftist traitor,” “radical Dem. senator” and “billionaire oilman & fund-raiser for Obama.” The list had a heading that read, “Use White Pages to locate people.”

In December 2020, Coffman traveled to Washington and attempted to drive to the residence of U.S. Sen. Ted Cruz (R-Texas) and called his office in an effort to “help with the election fraud he saw,” according to court records. Office staff said the man seemed “unbalanced” or “not 100 percent there,” but made no threatening statements, the prosecutor’s sentencing memorandum (pdf) states.

When federal agents searched Coffman’s Alabama home, they found 12 more Mason jars filled with gasoline and melted polystyrene foam and other components to make Molotov cocktails. Including in the pickup truck and at Coffman’s residence, agents found more than 25 firearms.

Police said Coffman acted of his own volition and wasn’t part of any group plan to bring weapons to Washington on Jan. 6.

Law enforcement was aware that Coffman was a participant at “Camp Lonestar,” a Texas militia gathering place where groups sought to patrol the border looking for illegal aliens, according to court records.

He argued that Coffman shouldn’t serve any more time behind bars, but instead be allowed to get help from the local Veterans Administration hospital.

“Mr. Coffman will have plenty ahead of him in terms of medical and mental health treatment,” Retureta said. “He has endured a strong, strong period of incarceration. I think that further incarceration would not be the appropriate sentence for him.”

Coffman tried to give a statement to the judge, but was so emotional it was nearly impossible to understand him.

“I wish I had stayed home,” he said through tears.

Kollar-Kotelly noted Coffman’s U.S. Army service from 1968 to 1976 and his 29 years of work for the same company. The judge said Coffman’s letter to the court showed remorse and she considered it “very carefully.”

But the possession of weapons and incendiary devices “are very serious offenses,” she said.

“I don’t think in all my years as a judge I’ve had quite such a collection of weapons that I’ve had to deal with,” said Kollar-Kotelly, who was appointed to the bench in 1997 by President Bill Clinton.

“Certainly guns, yes, all types and ammunition and various things, but the collection of them, particularly the Molotov cocktails, was concerning.”

Kollar-Kotelly told Coffman that he would still have things to look forward to after prison.

“From my perspective, you will still have a life ahead of you, and you need to forge and figure out what you want to do,” she said. “Don’t shake your head. You still will.”