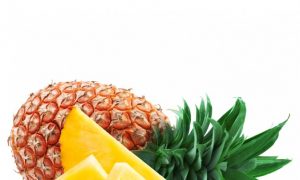 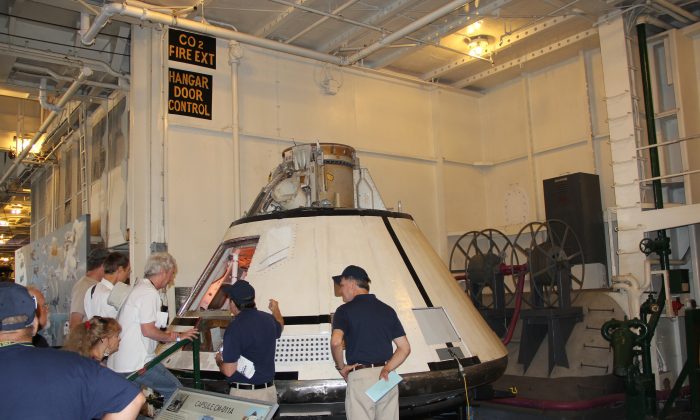 Visitors look at the lunar module or “capsule CM-011A” during the “Splashdown 45” event aboard the USS Hornet in Alameda, Calif., on July 26. (Steve Ispas/Epoch Times)
US

The USS Hornet Museum in Alameda celebrated on July 26 the 45th anniversary of the historic Apollo 11 mission.

On July 20th, 1969, Neil Armstrong and Buzz Aldrin were the first men to walk on the surface of the moon. Michael Collins, the third crew member of the mission, piloted the command spacecraft alone in lunar orbit, waiting for Armstrong and Aldrin’s return.

Four days later, the three astronauts as well as the first 47 pounds of lunar soil samples were successfully recovered by USS Hornet—the World War II and Vietnam War aircraft carrier—as the lunar module splashed back down to earth into the Pacific Ocean. It was the fulfillment of the final piece of a challenging operation that had been in planning for 10 years, at the initiative of President Eisenhower, and later, President Kennedy.

The 1969 event was broadcasted on TV in front of a live audience of over 500 million and is remembered for Armstrong’s famous quote after stepping onto the surface of the moon: “That’s one small step for man, one giant leap for mankind.” Upon their return, President Richard Nixon went aboard the USS Hornet to personally welcome the astronauts back to earth.

On Saturday, Buzz Aldrin talked about his experience during the mission 45 years ago and expressed his commitment to further space exploration—in particular, manned missions to Mars. “Our purpose should be to establish an ongoing presence of human beings from the planet Earth,” he said.

“While it was not a military mission, Apollo 11 contributed significantly to the end of the Cold War,” said Aldrin. “In Olympics, there are gold medals. Apollo 11 was a gold medal for the United States, with 100,000 working to put three people up there,” continued Aldrin during the question-and-answer session.

When answering a question about the feeling he got from being on the moon, Aldrin said “It isn’t white when you get there, it’s shades of gray. Hey, that sounds like a title of a good book, doesn’t it?”

Adrian Marcu, 45, of Berkeley, and a native of Romania, said there was no way he was going to miss this event. “This is history. I was 3 months old watching these guys stepping on the moon (or at least my parents said so), in the living room of our apartment in Bucharest, Romania. It was indeed ‘one giant leap for mankind.’ Also, if it played even a small role in the fall of communism 20 years later, it makes it an even greater accomplishment.”