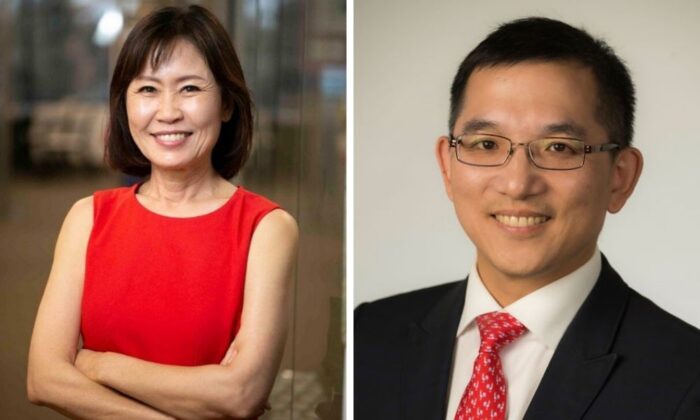 Steel will be running for her second term in Congress, where she last beat incumbent Rep. Harley Rouda in the 48th district in 2020. Previously, she was an Orange County Supervisor since 2015 and also served on the California State Board of Equalization.

Chen has also served on elected boards before, where he was a member of the Hacienda La Puente Unified School District from 2007 to 2015 and is currently a trustee of Mt. San Antonio College.

The district, which covers Orange and Los Angeles counties, went for Joe Biden by 6 points in 2020. Many pollsters today label the contest as a “toss up.”

The race, so far, has been contentious, with Steel in early February brought to light a vote by Chen in 2010—while on the Hacienda La Puente Unified School District Board—to bring the Chinese-funded Confucius Institute into the school system.

The institute, which has expanded since its founding in 2004 from primary schools to universities, prides itself as a cultural program to teach students about Chinese culture, language, and history, yet have been largely found to be a Chinese Communist Party (CCP) tactic to spread propaganda about China.

The U.S. State Department 2020 labeled the institute “as a foreign mission of the PRC [People’s Republic of China], recognizing [the Confucius Institute] for what it is: an entity advancing Beijing’s global propaganda and malign influence campaign on U.S. campuses and K-12 classrooms. Confucius Institutes are funded by the PRC and part of the Chinese Communist Party’s global influence and propaganda apparatus.”

In response, Chen said in an email fundraiser that Steel’s concern about the institute was part of “a wave of racist attacks” contributing to anti-Asian hate in the community, which Steel’s camp has denied.

“As Michelle Steel [recently] passed an amendment to hold the Chinese Communist Party accountable for environmental abuses, Jay Chen continues championing the CCP’s infiltration into our schools and calling parents who dare to challenge him, xenophobic,” Steel’s spokesperson Lance Trover said in a Feb. 8 statement. “Jay Chen owes voters an explanation as to why he continues standing with the Chinese Communist Party over California parents and families.”

Additionally, more contention arose in early April after Chen was taped mocking Steel’s accent, telling a fundraiser crowd that “you kind of need an interpreter to figure out exactly what [Steel’s] saying.”

Steel’s campaign has demanded an apology for the comment, with Steel saying her accent is part of her story as a first-generation Korean-American who speaks English as her third language.

According to the Federal Election Commission’s data through Mar. 31, Steel has raised $3.7 million, with Chen raising just shy of $2 million. Steel has also spent $1.7 million and currently has $2.1 million on hand, Chen has spent close to $700,000, with $1.3 million left on hand.

The primary election will be held on June 7, where the top two vote-getters will move on to the general election in November regardless of party affiliation, even if one candidate receives more than 50 percent of the vote.

A previous version of this article misstated that Shawn Collins was a candidate in the race. The Epoch Times regrets the error.