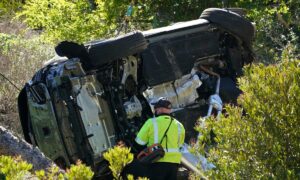 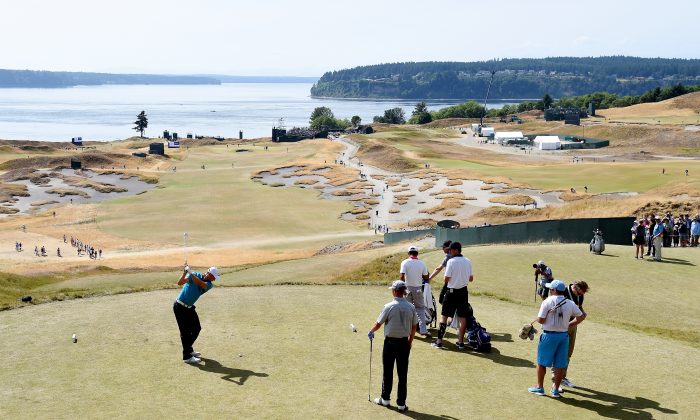 Martin Kaymer of Germany hits a shot during a practice round prior to the start of the 115th U.S. Open Championship at Chambers Bay on June 16, 2015 in University Place, Washington. (Harry How/Getty Images)
Golf

University Place, WA—The year was 1970. A new venue—Hazeltine National, located in Chaska, MN—emerged to challenge the best players in golf. The venue was unknown and untested to nearly all. It had been pushed by USGA President Totton Heffelfinger, a Minnesotan, intent in bringing the game’s premier event to his hometown area.

The course was panned by a number of competitors and the comments from touring professional Dave Hill, who ultimately finished second, overshadowed the stellar golf that Englishman Tony Jacklin produced in winning the event by seven strokes—becoming the only European player to hoist the trophy between 1926 and 2009.

The 1970 U.S. Open was awarded shortly after the Women’s Open and little was thought about it—until championship week. Going into that U.S. Open Hill, who had demonstrated serious golf ability winning three times the year prior and securing the Vardon Trophy for low scoring average, served notice in a way few players would have even dared think aloud yet alone carry out.

The fiery and at times combative Hill was prone to speaking candidly—when in most past instances such statements would only be offered in the privacy of the men’s locker room. Hill did not hold back stating that “Hazeltine really did lack only 80-acres of corn and a few cows. They ruined a good farm when they built this course.” Hill was fined $150 by Joe Dey, Jr., the Commissioner of the Tournament Players Division of the PGA of America. Eventually Hazeltine would be significantly remodeled before hosting another major event—the 1991 U.S. Open. Ironically, the remodeling work would be carried out by Trent Jones’ son—Rees. Hazeltine, to its credit, used the remodeling from the ’91 U.S. Open to land two PGA Championships—nearly won on both occasions by Tiger Woods—and will host the 2016 Ryder Cup Matches.

This week at Chambers Bay could very well spark similar comments from a range of contestants. Prior to the championship a few professionals—Ian Poulter and Ryan Palmer—have both stated they see little in terms of overall quality with this year’s host site. Interestingly, Poulter’s comments came from what he had heard from others—Palmer’s came from having played one practice round in May. “Put a quarter in the machine and go for a ride,” is how Palmer related to contours of the greens at Chambers Bay. “You have to spend so much time on the greens, practice rounds are going to take eight hours. Every green has five or six greens on it.”

Clearly, the USGA views things much differently but the spotlight will be intense. No Men’s U.S. Open has been played in the Pacific Northwest and how Chambers Bay fares could dictate what future role, if any, the facility plays. “This is a one-of-a-kind site for us at the U.S. Open,” said Executive Director Mike Davis. “There’s going to be some players who love the imagination, who, as I say, embrace it. Then there’s other players who just want predictability.”

Chambers Bay is not the youngest course to have ever hosted a U.S. Open. That honor falls to the 1952 U.S. Open site—Northwood Club in Dallas which opened in 1946 and hosted America’s premier golf event just six years later. Chambers Bay opened June 23, 2007 and will not be even eight years old when the championship concludes Father’s Day on June 21.

The 610-acre golf property previously was the home of a massive sand and gravel quarry. Pierce County bought the land—just over 900 total acres—for $33 million in 1992. Chambers Bay is only the third municipally-owned course after Bethpage State Park / Black Course (’02 & ’09) and Torrey Pines / South Course (’08) to have hosted the U.S. Men’s Open. To craft the course, 1.4 million cubic yards were moved—roughly over 100,000 truckloads. The course did serve as host to the 2010 U.S. Men’s Amateur and a few key course changes were made reflecting what was encountered during that event.

Elasticity will be the buzz word and USGA Executive Director Mike Davis has emphatically stated the course will provide a slew of different hole and pin placement positions. For example, the first hole will play as both a par-4 and par-5 hole on different rounds. Expect the course to play anywhere from 7,300 to nearly 7,800 yards. The pressure on Davis will be to create a playing challenge that pushes the challenge envelope without crossing the line into creating an event in which luck outweighs skill. Such situations have happened in the recent past—’98 at The Olympic Club in San Francisco when a rear pin placement was made at the 18th hole resulting in balls rolling backwards like on a putt-putt course. And the USGA did itself no favors in ’04 they pushed putting surfaces to the brink of exhaustion without watering at Shinnecock Hills on Long Island, NY. The serious miscalculation by the USGA led the leadership of Shinnecock Hills to balk at hosting another U.S. Open until only recently when the club signed on for the ’18 event.

It is fascinating to note that Robert Trent Jones, Sr., a man who revolutionized the field of course architecture in the second half of the 20th century would have one of his sons, Robert Trent Jones, Jr., responsible for the design at Chambers Bay. The senior Jones was vilified for what Hazeltine provided 45 years ago. Whether that same outcome befalls Chambers Bay and Jones, Jr. is unclear. This year’s Open comes in a far different world than the one in 1970. Social media will only serve to magnify comments from a range of directions. The USGA made a conscious decision when Bethpage was selected in ’02 that the national championship of American golf would no longer be the singular domain of elite private clubs. Nonetheless, Chambers Bay will need to demonstrate it’s place on the high pecking order of public awareness is nothing more than a quick 15 minutes of fame. The stakes are indeed high this week.