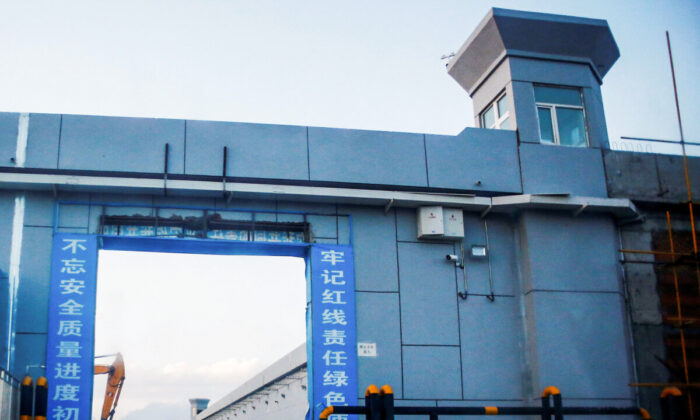 A gate of what is officially known as a vocational skills education centre is photographed in Dabancheng, in Xinjiang Uyghur Autonomous Region, China, on Sept. 4, 2018. (Thomas Peter/Reuters)
International Relations

More nations joined the rebuke of the communist Chinese regime at the United Nations on Oct. 21 over its human rights abuses against Uyghurs and other Muslim minorities in the far western Xinjiang region.

“We have seen an increasing number of reports of widespread and systematic human rights violations, including reports documenting torture or cruel, inhuman, and degrading treatment or punishment, forced sterilization, sexual- and gender-based violence, and forced separation of children,” France’s U.N. Ambassador Nicolas De Riviere read in a statement on behalf of the group at Thursday’s meeting.

The declaration was endorsed by 43 nations this year, after Turkey and other African countries including Liberia and Eswatini joined.

In the joint letter, the 43 nations voiced concern about the “severe restrictions on freedom of religion or belief and the freedoms of movement, association, and expression as well as on Uyghur culture.” They also criticized the “widespread surveillance” targeting Uyghurs and members of other minorities.

They called on the regime “to allow immediate, meaningful and unfettered access to Xinjiang for independent observers, including the UN High Commissioner for Human Rights and her Office.”

The Chinese regime and its supporters responded. Cuba’s envoy read another statement on behalf of 62 countries, including Iran, North Korea, and Venezuela, claiming those abuses are China’s internal affairs.

Beijing’s U.N. Ambassador Zhang Jun dismissed all criticism as “groundless” at a news conference after the U.N. meeting, accusing the United States and other countries of spreading “trite lies.”

In 2020, German Ambassador Christoph Heusgen read a similarly worded statement on behalf of 39 countries. In 2019, the United Kingdom read the first condemnation signed by 23 countries at the meeting of the General Assembly’s Human Rights Committee.

The international community has repeatedly criticized the detention of up to one million Uyghurs and other Muslim minorities in “political re-education camps.” The regime claimed the campaign is to “counter terrorism.”

Despite the piling pressure, Beijing continued to denounce all accusations and said on Thursday that “Xinjiang’s door is always open.”

U.N. human rights chief Michelle Bachelet has requested to examine the serious human rights violations in Xinjiang since September 2018, but the terms of her visit haven’t been agreed upon.

Louis Charbonneau, Human Rights Watch’s U.N. director, said this year marks the first time that “all U.N. regional groups joined in calling for the violations in Xinjiang to stop and U.N. investigators to get immediate access.”

“U.N. member states should establish an international commission of inquiry to formally investigate alleged crimes against humanity in Xinjiang and recommend avenues for holding those responsible to account.”