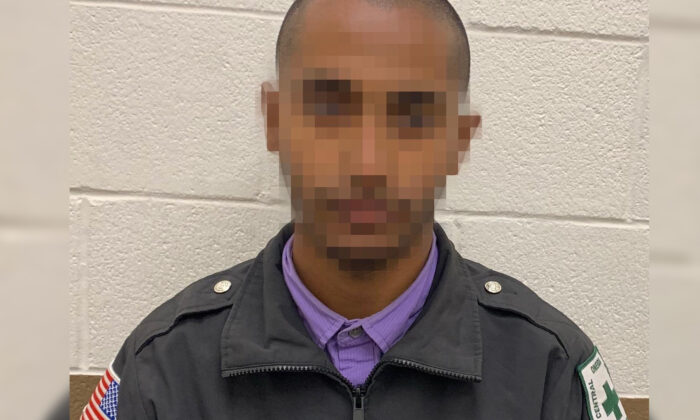 A male Saudi Arabian national described as a potential terrorist poses after he was arrested for illegally entering the United States, in Arizona on Dec. 16, 2021. (U.S. Border Patrol)
Immigration & Border Security

U.S. authorities have arrested 42 suspected terrorists at the U.S.–Mexico border under President Joe Biden and some may have been released into the country.

“I don’t know,” Homeland Security Secretary Alejandro Mayorkas said on April 28 when asked if any were released during a hearing on Capitol Hill.

The Department of Homeland Security (DHS) disclosed the number of suspected terrorists arrested at the border in a written response to questions from Rep. Chip Roy (R-Texas).

“Since January 20, 2021, the U.S. Border Patrol and the Office of Field Operations has arrested 42 subjects who were on the terror watchlist and attempted to enter the United States illegally,” DHS said. “These numbers are inclusive of anyone who may be on the No-Fly List.”

The watchlist is comprised of people who are “reasonably suspected to be involved in terrorism (or related activities),” according to the FBI.

A subset of the people are on the no-fly list.

Rep. Jim Jordan (R-Ohio) asked Mayorkas during the hearing whether any of the suspects are still in the country.

“Some of them may still be in detention,” Mayorkas said.

But after Jordan asked whether any had been released into the United States, Mayorkas was unable to say.

“I do not know the answer to your question,” Mayorkas said, before promising to follow up with Jordan after the hearing.

“The secretary of homeland security does not know the answer to the status of 42 individuals who came to our southern border illegally or on the no-fly list of the terrorist watchlist. You do not know whether they have been released or not into the country? That’s your testimony?” Jordan said.

“This is outrageous,” Rep. Mike Johnson (R-La.) added. “Of all our federal agencies, sir, I think yours is the one that has the smallest margin of error. Because if the secretary of homeland security is unable or unwilling to give these answers, to perform his duties and accomplish his mission, crime surges, chaos ensues, and innocent people die. Mr. Mayorkas, that is exactly what is happening on your watch.”

Under the Biden administration, a record number of illegal immigrant apprehensions were recorded in one year at the U.S.–Mexico border. Law enforcement officials in border states have reported crime increases linked to the surge, and the administration has been transporting illegal aliens all around the country.

The DHS also disclosed to Roy that some 479 known gang members have been arrested at the border since Jan. 20, 2021, including 183 members of the brutal MS-13 gang.

“Countless numbers of known terrorists and vicious gang members are clearly coming across the border and making their way into our communities, all over the country,” Johnson said.

DHS said in early 2019 that an average of 10 known or suspected terrorists are prevented from entering the United States every day. Most are encountered at airports or even while still overseas as they apply for a visa.

An additional 3,000 “special-interest” aliens were apprehended at the southwest border in 2018, then-DHS Secretary Kirstjen Nielsen said at the time.

Mayorkas during Thursday’s hearing continued his defense of the administration’s handling of the border, insisting his department “has been executing a comprehensive strategy to secure our borders and rebuild our immigration system.”

He also repeated a claim he’s been promoting since being selected—that the system under the Trump administration was “broken and dismantled”—and told members that only Congress can fix the system, which is “under strain” from the unprecedented levels of illegal immigration.

“Yet we have effectively managed an unprecedented number of noncitizens seeking to enter the United States and interdicted more drugs and disrupted more smuggling operations than ever before,” Mayorkas testified.