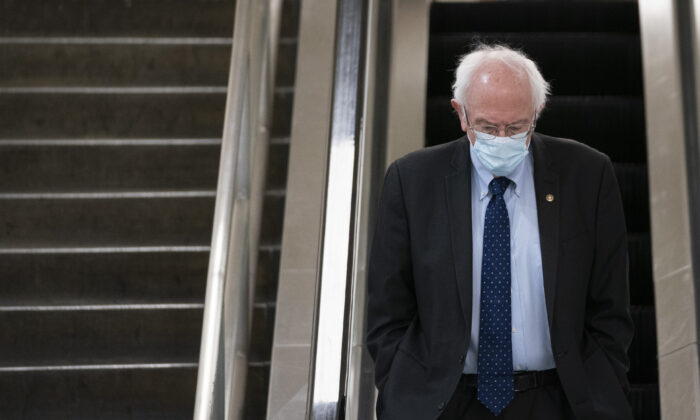 Dozens of Democrat senators in a Senate session that is still going early Friday voted to show their support for sending stimulus checks to illegal immigrants.

Republicans offered a flurry of amendments during the Senate’s budget reconciliation debate as Democrats aim at using the budget process to ram through President Joe Biden’s COVID-19 relief package. The nonbinding amendments are a way to get Democrats on the record about various issues.

“Senate Republicans will be ready and waiting with a host of amendments to improve the rushed procedural step that’s being jammed through. We’ll be getting senators on the record about whether taxpayers should fund checks for illegal immigrants, whether Democrats should raise taxes on small businesses in the midst of this historic crisis, and whether generous federal funding should pour into school districts where the unions refuse to let schools open, and this is just a small taste,” Senate Republican Leader Mitch McConnell (R-Ky.) said on the Senate floor.

“It would establish a dangerous precedent if the federal government were to give a direct cash payment to those who have jumped the line and subverted our nation’s immigration system to enter the United States,” Young said in a statement. “We shouldn’t give checks to foreigners who’ve broken our laws. Pandemic relief should go only to Americans, not illegal immigrants,” Cotton added.

Republicans also proposed other amendments, partially as a way to make it more difficult to pass the budget resolution. The process is known colloquially on Capitol Hill as “vote-a-rama.”

Republicans wanted to show their displeasure with how Democrats are resorting to a budget tool to work on passing Biden’s $1.9 trillion relief plan without Republican votes. The GOP largely opposed the package, noting that money remains unspent from the $918 billion plan Congress passed late last year.

Sen. John Thune (R-Wyo.) noted that the Senate’s 50–50 deadlock can only be broken by Vice President Kamala Harris and asserted voters gave lawmakers a mandate for bipartisanship. He also referenced Biden’s promise to try to unify the country.

“It’s common to talk about unity at inaugurations. I have been to a lot of them. But all too often, that commitment is quickly forgotten. And, unfortunately, we’re already seeing signs that members of the Democrat leadership are rapidly abandoning the president’s call for bipartisanship,” he said. “Democrats turn toward budget reconciliation, a process that allows certain legislation to pass the Senate with a simple majority instead of 60 votes, which is normal here, would be more understandable if Republicans had categorically refused to consider any additional COVID legislation. But that isn’t even close to being the case.”

Democrats, who have accused Republicans of not acting with enough urgency to combat the COVID-19 pandemic, griped about the overnight session.

“We need to remember what this is all about. This is not about a goofy 10-hour or 12-hour or 15-hour process where we stack amendments and try to set each other up, that we’ll somehow trick someone into taking a bad position that can be turned into a campaign advertisement,” Sen. Brian Schatz (D-Hawaii) told colleagues on the Senate floor. “It is nonsense, and everybody should ignore it if they can. Do anything to not watch vote-a-rama.”

Among the other measures that failed to pass: an amendment aimed at making sure COVID-19-related deaths of residents or staff at nursing homes are accurately reported, a commentary at the ongoing situation in New York; an amendment that would decrease funding for building roads in foreign countries in favor of building roads in the United States; and an amendment disapproving of any legislation to change the number of Supreme Court seats.

Other amendments came from Democrats or were proposed with Democrat support. Sens. Joe Manchin (D-W.Va.) and Susan Collins (R-Maine) proposed one that says a new round of stimulus checks shouldn’t go to “upper-income taxpayers.” The amendment drew support from every member of the body except for Sen. Rand Paul (R-Ky.).

Senators also approved an amendment that is aimed at providing funding to schools in states that lose revenue because of Biden’s pause on oil and natural gas permits, an amendment that seeks to fund a public awareness campaign for COVID-19 vaccines, and an amendment expressing support for keeping the U.S. embassy in Israel in Jerusalem, where former President Donald Trump moved it to from Tel Aviv.