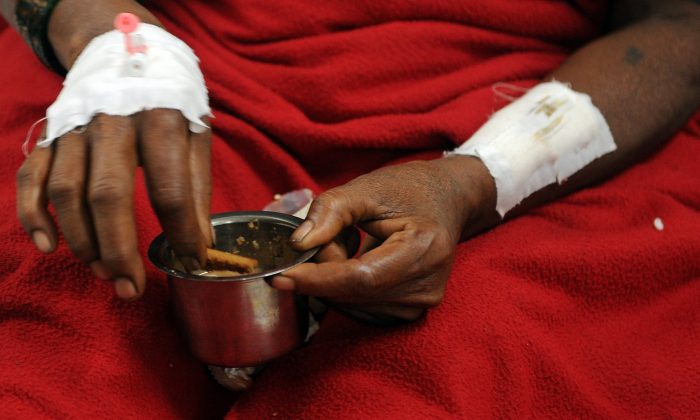 Indian woman, Meenabai Lembe, survivor of the landslide at Malin village in Pune district in the western state of Maharashtra, dips a biscuit into her tea as she recuperates at a government hospital in Manchar on July 31, 2014. Rescuers battled through heavy rains in a desperate search for victims of a landslide in western India that buried dozens of homes, with fears the death toll could reach 150. (Indranil Mukherjee/AFP/Getty Images)
India

41 Die in Landslide in India

NEW DELHI—Forty-one people lost their lives and 150 are believed trapped under the debris of a landslide that devastated Malin village near the western city of Pune in India on Wednesday morning.

“We have around nine survivors from the debris. The operation is still going on. The National Disaster Relief Force is doing the operation,” Suresh Jadav, the Additional District Magistrate in Pune told Epoch Times on Thursday morning.

According to Jadav the situation is grave; forty-four houses still remain buried under the debris. He estimates sixteen to twenty people have been cremated already.

Rain in the region continues to pour, hampering the rescue effort.

“My men are working day and night. We have all the equipment, we even have equipment to work during the night hours,” Jadav said.

Indian Prime Minister Narendra Modi dispatched the country’s Home Minister, Rajnath Singh to the site on Thursday. “Loss of lives in landslide in Pune district is saddening. Spoke to Rajnath [Singh] ji & he would be travelling to Pune to take stock of the situation,” Modi tweeted on Wednesday.

The Prime Minister’s National Relief Fund has promised 2 lakh rupees ($3,285) to the family of the victims.

According to DNA newspaper, most of the victims of the landslides belong to a tribe called Mahadeo Koli. The tribal community cultivate rice paddy on the hill slopes, which used to be covered in trees. Tree loss, combined with heavy rain fall, is one possible reason the landslide occurred.