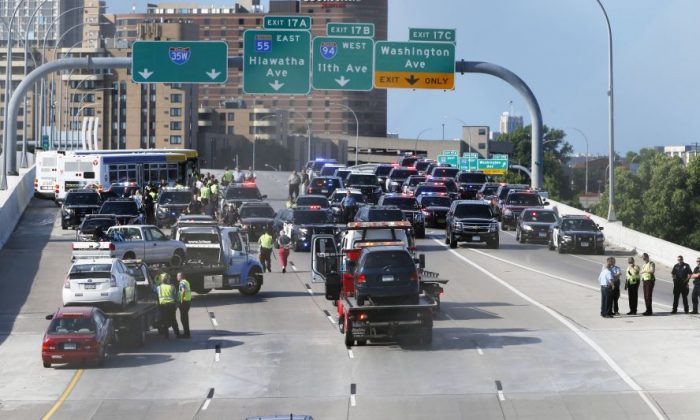 State troopers and police clear the Interstate 35W freeway where protesters blocked the highway leading into Minneapolis over the Mississippi River bridge during rush hour Wednesday, July 13, 2016, in Minneapolis as protests continue over the shooting death by police of Philando Castile. The protesters were arrested. (AP Photo/Jim Mone)
News

The demonstrators walked onto a bridge across the Mississippi River and chanted, “I believe that we will win.” Troopers arrested protesters on the freeway after about an hour. The interstate reopened shortly after 9:15 a.m.

The protesters come after Philando Castile was fatally shot by a St. Anthony officer during a traffic stop in the Twin Cities suburb of Falcon Heights last week.

“The State Patrol supports the right to exercise one’s First Amendment rights, but the freeway is not the place to do so. The closure of an interstate freeway for the purposes of a demonstration is unacceptable,” Col. Matt Langer, Minnesota State Patrol chief, told the Bismarck Tribune.

The group says it shut down the highway to support Black Lives Matter, releasing a statement.

“The coalition…believes this shut down reinforces our belief that comfort and business as usual must be disrupted until substantive changes occur in our city and throughout the country. We support community-led alternatives, solutions, and programs to protect our communities. On this day, we support the workers attempting to make a living but we also know that sacrifices must be made if we hope to live decently together,” the statement read, according to CBS Minnesota.