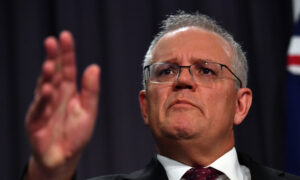 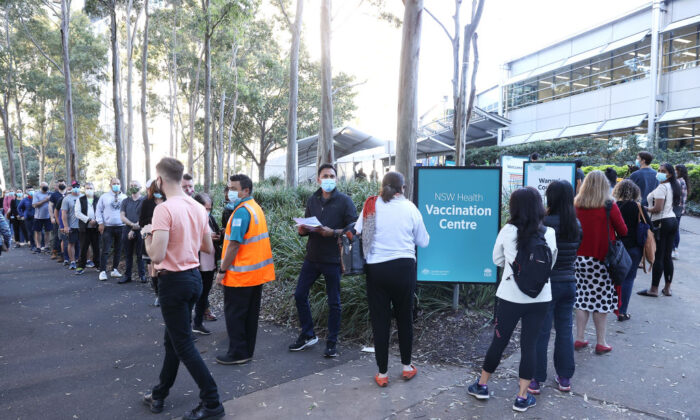 People are seen queuing to enter a mass COVID-19 vaccination hub on May 10, 2021 in Sydney, Australia. (Mark Kolbe/Getty Images)
Australia

Prime Minister Scott Morrison has said the government is already spending $40 million on a campaign to promote CCP virus vaccines to targeted priority groups, including older adults and aged care residents, amid a push for an urgent marketing effort to combat broader vaccine hesitancy.

Morrison said there’s no point in targeting promotional vaccine messages to people in their 30s because they aren’t currently eligible to get vaccinated.

But Australian Medical Association (AMA) Deputy President Chris Moy wants a more effective national strategy to motivate people who are in no rush to get one of the vaccines on offer.

“At the moment, given we have no COVID [in Australia] and we’re living in this really gilded cage, which is disconnected from the world, people do not perceive a risk, and all they’re hearing is the negatives,” Moy told ABC radio on Thursday.

Moy wants to convince people to roll up their sleeves by promoting the benefits of getting a jab.

Promoting the benefits is the focus of the New Zealand government’s vaccination campaign ad, which likens getting a vaccine to a “metaphorical door to freedom.”

The AMA deputy president used the high prevalence overseas of COVID-19, the disease caused by the CCP (Chinese Communist Party) virus, to warn that Australians were “sitting ducks” until a significant proportion of the country gets vaccinated.

But Morrison argued the campaign would ramp up later this year as more people become eligible and big shipments of Pfizer vaccines arrived.

“There’s no point talking to people who are 30 years old at the moment because they can’t go and get a vaccine,” he told 3AW radio on Thursday.

“We’re talking to those who are eligible for the vaccine at the moment, which is over 50s and particularly those who are over 70 and in residential aged care facilities.”

This comes after figures from a poll by The Sydney Morning Herald and The Age with research company Resolve Strategic showed that around 29 percent of people said they were unlikely to get vaccinated.

According to the poll, of these people, around 50 percent said their main reason for not getting the vaccine was nervousness about the side effects for their age group—such as the rare but serious blood clots that were in April officially linked to the AstraZeneca vaccine for people under 50.

About 21 percent, or one in five, said they felt no rush to get the jab because there was no international travel, and a further 21 percent said they were not in a priority group and could wait.

The prime minister addressed the figures on Wednesday, saying he was not “overly troubled” that 29 percent of people say they’re unlikely to get a CCP virus vaccine. Instead, he told 2GB radio he’d rather focus for now on the 70 percent who want to have it.

“So let’s just get on with them,” he said. “There’s plenty of time to have the chat with the others who are a bit hesitant; that’s alright, it’s a free country.”

More than 3.2 million Australians have now received a COVID-19 vaccination, with the daily pace of the rollout increasing as the program expands.

This week the federal government reported its largest uptake, with 95,000 vaccine doses administered a single day.