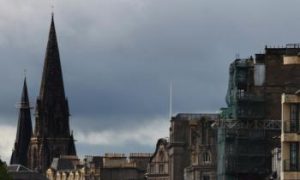 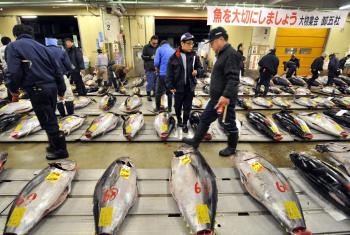 Fishmongers check large bluefin tunas before the first trading of the year at Tokyo's Tsukiji fish market on Jan. 5. A 342 kg bluefin tuna was traded at $400,000 at the wholesale market auction. (YOSHIKAZU TSUNO/AFP/Getty Images)
World

By Alex Johnston
Print
$400,000 Bluefin Tuna Tops the Year’s First Fish Auction in Tokyo (NTD Television)
A bluefin tuna fish sold at an auction in Tokyo netted $400,000, setting a record for highest price paid for a single fish since record-keeping started in 1999, according to Reuters and other reports.

The 754-pound bluefin tuna was sold in the first auction in the Tsukiji market in Tokyo. Breaking it down, the sale of the fish averaged $530 per pound.

Bluefin tuna are valued by sushi chefs and are one of the most prized delicacies in Japan.

A Hong Kong-based sushi chain owned by Ricky Cheng and a Tokyo restaurant jointly purchased the fish. Cheng told the BBC that it is a “really good fish” but said that the chain may not make much of a profit from it.

Bluefin tuna are become more scarce as the rest of the world has started to develop a taste for sushi.

"It became a bit too expensive," Yosuke Imada, the owner of the Tokyo sushi restaurant, told CNN. "But the people would talk about it a while."

According to CNN, the fish was caught off Hokkaido in northern Japan.

"The custom of eating raw fish is spreading throughout the world, so that it's no longer an era where Japan is consuming all of the limited supply of tuna," an unnamed auction manager told Reuters.

Some of the highest-priced auctions of the year are held during the New Year.