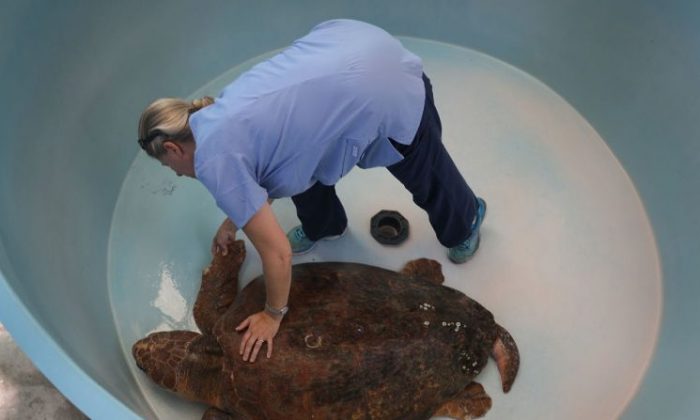 Veterinarian Dr. Heather Barron, from the Clinic for the Rehabilitation of Wildlife, cares for a Loggerhead sea turtle that was found washed ashore after becoming sick in the red tide on Aug. 1, 2018 in Sanibel, Fla. Dr. Barron said, this year's red tide is absolutely the worst she has seen for adult sea turtles. (Joe Raedle/Getty Images)
By Zachary Stieber

The bloom conditions for the algae started in November 2017 and since then 400 stranded and dead turtles have been pulled from the waters off the coast of Southwest Florida, reported the Fort Myers News-Press.

The algae bloom has also been killing other marine animals.

Red tide counts of over 1 million cells per liter have been recorded by the Florida Fish and Wildlife Commission; fish can be killed, and people can suffer respiratory problems, when counts reach 10,000 cells per liter.

“This is horrific what we’re enduring now, but it needs to be a wake-up call to people that clean water is important to more than just wildlife,” Heather Barron, a veterinarian and research director at Sanibel’s CROW Clinic wildlife rescue center, told the Miami Herald. The center began treating poisoned birds as early as October. “As the person dealing with all these hundreds of dying animals, I’m upset.”

Florida is also suffering from blue-green algae, which prompted Gov. Rick Scott to declare a state of emergency in seven counties in early July. According to the emergency order, the cause of the algae blooms was Lake Okeechobee water discharges from the Army Corps of Engineers.

“As Governor, it is my duty to protect Floridians, no matter what it takes. Today, our state is once again facing a crisis from water releases controlled by the U.S. Army Corps of Engineers,” Scott, who is running for the U.S. Senate, said in a statement.

“This has prompted me to issue an emergency declaration, so our state agencies can do everything in their power to minimize the harmful impacts these releases are having on our communities,” he said.

Scott told reporters on Aug. 2 that the red algae bloom is an issue the Gulf Coast has been dealing with for a long time but the blue-green algae is new.

“Under the prior administration, they wouldn’t give us the money to fix it. That’s been something that’s been going on for a long time. And the federal government just hasn’t done their job,” he said.

As part of the $3 million emergency order, $700,000 was directed to Lee County to clean up the algae.

TC Palm noted that Scott’s contender for the Senate, U.S. Sen. Bill Nelson (D-Fla.), criticized Scott over his handling of the algae crisis, but that “none of Nelson’s most significant efforts on the algae front have been successful.”