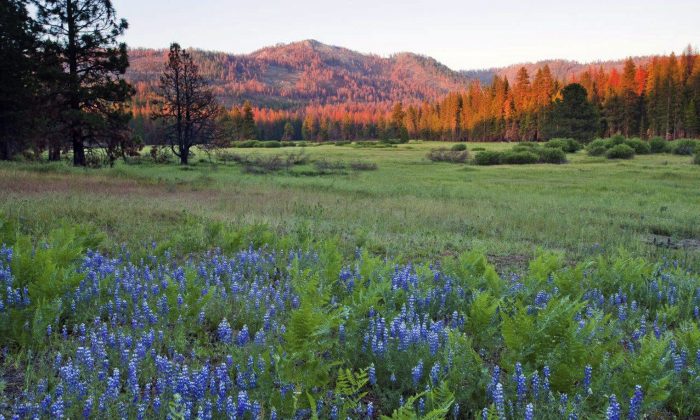 This undated photo provided by The Trust for Public Land shows Ackerson Meadow in Yosemite National Park, Calif. Visitors to the park now have more room to explore nature with the announcement on Wed. Sept. 7, 2016 that the park's western boundary has expanded to include Ackerson Meadow, 400 acres of tree-covered Sierra Nevada foothills, grassland and a creek that flows into the Tuolumne River. This is the park's biggest expansion in nearly 70 years, and will serve as wildlife habitat. (Robb Hirsch/The Trust for Public Land via AP)
US

FRESNO, Calif.—Robin Wainwright could have cashed-in on pristine grassland and forest he owned along the border with Yosemite National Park — building an upscale resort for a few fortunate guests.

Wainwright and his wife Nancy, however, decided to take a slight loss on their investment and sold it to a land trust, which donated it Wednesday to Yosemite.

It expands the park by 400 acres, Yosemite’s largest addition in nearly 70 years.

The public will soon be able to enjoy the wildlife and natural scenery, such as the explosion of flowers that blossom each spring and bears that often stroll through the property.

“To have that accessible by everyone to me is just a great thing,” Robin Wainwright said. “It was worth losing a little bit of money for that.”

Ackerson Meadow is located along Yosemite’s western boundary. The area was purchased from private owners by the Trust for Public Land, a nonprofit conservation group, for $2.3 million and donated to the park.

Officials told The Associated Press that Yosemite will preserve the land — historically used for logging and cattle grazing — as habitat for wildlife such as the great grey owl, the largest owl in North American and listed as endangered by California wildlife officials.

Shaun Crook, president of the Tuolumne County Farm Bureau, said that not everybody supported turning the private property over to the government.

For at least a century, the grassy Ackerson Meadow has fattened beef cattle and been used for logging, he said.

“That will no longer happen,” he said, adding that both industries are being squeezed out of business. “I fear we’ll lose the value of that meadow.”

The park’s boundary has seen some minor changes over the years, but this expansion is the largest since 1949 to the park of nearly 750,000 acres total, park spokesman Scott Gediman said.

More than 4.5 million people are expected to visit Yosemite this year, which Gediman said would set a record for the park that celebrated its 125th anniversary in 2015.

Other draws to the park include the massive Half Dome rock and the sheer, granite face of El Capitan — both admired by visitors from floor of Yosemite Valley.

Elsewhere in the park stand groves of giant sequoia, some of the oldest and largest living things on Earth.

The land was bought with $1.53 million from the Trust for Public Land and $520,000 from the Yosemite Conservancy, which supports a variety of projects in the park. Anonymous donors contributed the rest, Gediman said.

“We are delighted and proud to make this gift to Yosemite and the people of America,” said Will Rogers, president of the Trust for Public Land.