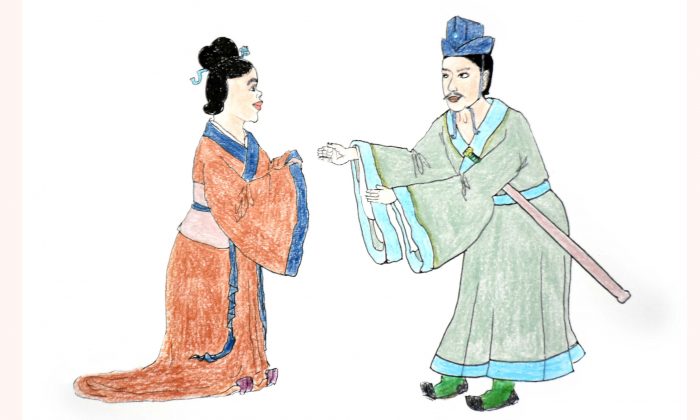 40-Year-Old Ugly Spinster Offered Herself to the King

There was an ugly woman in the state of Qi during the Warring States Period (475–221 B.C.) who was still single at the age of 40. One day, she came to the king’s palace and asked to marry the king. The strangest thing was, the king did marry her and even made her the queen.

Wuyan is the name of a place as well as a woman. Historian Liu Xiang of the Western Han Dynasty (206 B.C. to A.D. 24), in the “Biographies of Exemplary Women, Zhongli Chun of Qi” that he edited, described Wuyan as having unparalleled ugliness—a protruding forehead, a jutting chin, sunken eyes, an upward-tilted nose, a thick neck, little hair, a pigeon chest, a hunched back, and a dark complexion.

But Wuyan was not bothered by her looks. Neither did she care that she was still a spinster at 40.

One day, Wuyan left her hometown by herself and came to the capital of the state of Qi, Linzi, which is present-day Zibo. She went up to the palace door and said to the guards, “I’m a Qi woman who cannot find a husband. I hear that the king is wise. I’d like to work as a cleaner in the harem. I’ll be waiting humbly right outside the king’s door. Please grant me my wish.”

This was during the reign of King Xuan of Qi. He was about to have a feast with his officials when the guards informed him that an ugly woman was offering herself to be a cleaner in the harem. Everybody roared with laughter. “What an eccentric woman!” they said.

The offer to clean the harem was not to be interpreted literally. What Wuyan meant was, “I want to marry King Xuan.”

The king summoned Wuyan out of curiosity. He asked Wuyan: “You cannot find a husband in your hometown, yet you want to marry the king. What talent do you have?”

Wuyan answered: “I have no talent. It’s just that I admire Your Majesty’s virtues.”

King Xuan said, “Still, I want to know what you’re capable of.”

Wuyan paused for quite some time before she said, “I can become invisible.”

King Xuan became fascinated. He said: “I’m keen to see it. Can you show it to me?” Before he could finish speaking, Wuyan had vanished into thin air.

The king was dumbfounded. He lost no time in finding books on invisibility, and he started studying them. But he could not figure out how Wuyan had disappeared. He summoned Wuyan the following day, and she came.

Wuyan did not answer King Xuan’s queries about invisibility. Instead, with widened eyes and clenched teeth, she raised her hands and touched her knees and repeated several times, “Danger!”

Wuyan said, “The state of Qi is facing four crises.”

The first crisis, she said, was that Qi was confronted by formidable foes, but King Xuan had not yet established credibility as a leader. If anything happened to the kingdom, morale would be threatened.

The second crisis was that the people were weary from the building of the majestic terrace.

The third crisis was that people of virtue were living in seclusion, and those by the king’s side were traitorous and disloyal.

The fourth crisis was that the king indulged himself in making merry instead of devoting all his time to running the state. Danger lurked beneath the surface.

King Xuan began to take Wuyan seriously. This was not an ugly woman left on the shelf, but an absolute godsend.

He had the five-story terrace demolished, stopped making merry, and dismissed people who curried favor with him. He also proclaimed his son as the crown prince and was even more filial to his mother.

Wuyan was invited into the palace, not to be a cleaner or a concubine, but the queen.

Since Wuyan came from Wuyan (which literally means “no salt”), she came to be known as Zhong Wuyan (no beauty). According to historical books, her real name was Zhongli Chun. The “Biographies of Exemplary Women” describes her as “Zhongli Chun, a woman from Wuyan of Qi. Queen of King Xuan.”

In China’s history, Qi was one of the seven states during the Warring States Period, and it was the last state Qin destroyed to unify China. It had over 10,000 chariots, and it was the “national university of Qi” from which the Contention of a Hundred Schools of Thought stemmed.

According to the “Biographies of Exemplary Women,” Zhongli Chun was an upright person who spoke with eloquence. It was to her credit that King Xuan was able to transform Qi into a strong state.