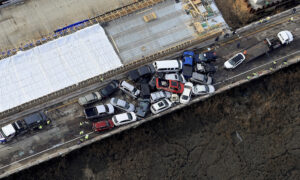 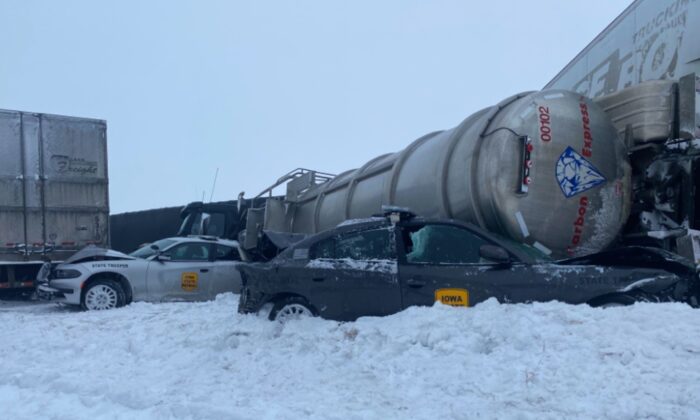 A lumbering winter storm has impacted people’s lives in multiple states across the nation throughout the week, with heavy snow in Iowa leading to dangerous travel conditions.

Troopers in the state shut down a section of Interstate 80 west of Newton on Thursday shortly before noon after roughly 40 vehicles were involved in a massive pile-up.

Authorities reported “a few serious injuries” while several other motorists and passengers sustained minor injuries. None of the troopers responding to the incident were injured, Iowa State Patrol officials said.

Several photos of the incident shared on social media by the agency show trucks, along with other cars, slid off the road, as well as a Carbon Express trailer turned on its side on top of another vehicle.

(2-4 3:26 PM) No Troopers were injured at the I-80 eastbound multi-vehicle crash. Authorities report a few serious injuries and several minor injuries to motorists/passengers. Check https://t.co/snjL2h7lb6 for additional closures/blockages on I-80, Hwy. 20 and other roadways. pic.twitter.com/lSJZoqgZ2Q

The I-80 remained closed for most of the day but reopened again at about 7:15 p.m., the state patrol announced.

“Be safe as you travel on roadways tonight and in the days ahead,” the agency warned, as “patchy, blowing snow” is still covering many roadways on the east side of the state, with a possibility of leading to more havoc on roads.

Officials advised drivers to stay off the road on Friday as some areas still have dangerous travel conditions. The agency also asked people to check the Iowa Department of Transportation (IOWADOT) website—an official source for traffic and traveler information—before driving.

The hazardous blizzard-like condition is forecasted to improve in Iowa in the coming days.

(2-5 6 am) Crews have been out all night, but patchy, blowing snow still covers many roadways in eastern Iowa. Travel is still not advised in a some areas. Conditions are expected to improve this morning, but please check Iowa 511 app or https://t.co/2XHJbG5B9b before you travel. pic.twitter.com/7bBrPE9spz

Iowa State Patrol troopers reported they have responded between Wednesday and Thursday alone to a total of 195 car crashes, 169 reports of property damage, 350 motorist assists, and 25 personal injuries, including one that was fatal.

The agency also shared video footage from KCCI, showing the extent of the pileup on the I-80’s eastbound lanes between Colfax and Newton.