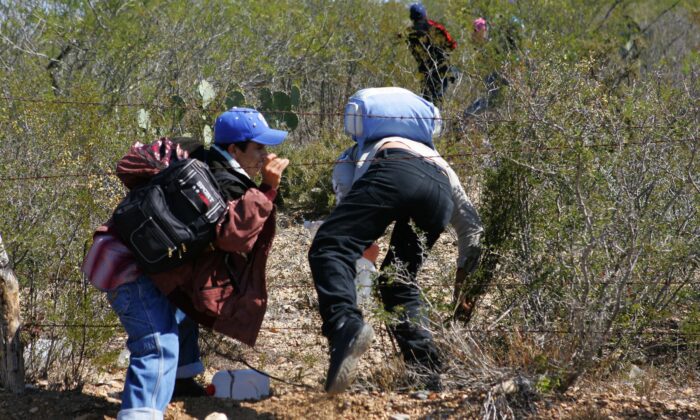 A group crosses a road on the way to Nuevo Laredo, Mexico, with the intention of entering the United States, in a file photograph. (Omar Torres/AFP via Getty Images)
By Zachary Stieber

Officials in Laredo, located across the Rio Grande from Nuevo Laredo, Mexico, didn’t respond to requests for comment by press time. However, they offered a similar positivity percentage in a federal lawsuit filed last month.

Officials said in the complaint that Customs and Border Protection officials have been releasing immigrants in the city, despite a large number of them testing positive for the CCP (Chinese Communist Party) virus, which causes the disease COVID-19.

The surge in illegal immigrants crossing the border amid the COVID-19 pandemic presents a safety concern, Republican lawmakers and others have argued.

“Americans are sick and tired of endless mandates while watching COVID-19 cases surge at the border,” Rep. Andy Biggs (R-Ariz.) wrote on Twitter this week.

While the Laredo case numbers are the highest recorded along the border, officials in McAllen, Texas, said last week that of the 7,000 immigrants released by federal officers into McAllen the week before, 1,500 of them have tested positive for COVID-19.

“Lately, we’ve been getting about 1,800 immigrants a day,” McAllen Mayor Javier Villalobos said in a video arguing against unchecked immigration. “Then, coupled with the fact that 15 percent of the immigrants have COVID, has caused substantial problems to our great city of McAllen.”

Don McLaughlin, the mayor of Uvalde, Texas, told The Epoch Times this week that immigrants are probably responsible for 15 to 20 percent of COVID-19 cases in the community, citing the most recent survey completed by officials in the border city.

“The COVID deal is getting really serious again and really bad. And again, here we are on the southern border. ‘Just come on in.’ I mean, it just doesn’t make sense,” he said.

A Border Patrol agent who declined to be named in order to avoid repercussions told The Epoch Times that the agency was pushing many immigrants to Laredo, which triggered a lawsuit from the city against the Biden administration.

Laredo officials said in the complaint that Border Patrol planned to bus 250 to 350 immigrants per day into the city.

“Not every apprehended person is tested for COVID-19 as part of Defendants’ processing procedure before they are legally released from immigration custody and into the general public. Therefore, many, if not most, go untested and risk spreading the disease to other[s] in their group and the general public after their release,” the filing reads.

Of 139 confirmed COVID-19 cases in Laredo as of July 11, 63 were among immigrants or detainees.

On Aug. 12, a CBP spokesperson told The Epoch Times via email that “the border is not open” and that the agency is operating under Centers for Disease Control and Prevention (CDC) guidelines for the pandemic.

“CBP is making every effort to remain within CDC guidelines and mitigate long periods of processing and holding to minimize potential exposure to our workforce, those in custody, and the community. Once processing is complete, these individuals will be expeditiously transferred out of CBP custody,” the spokesperson said.

The lawsuit was dismissed on Aug. 9 after the parties reached an agreement.

Saenz told outlets that the agreement includes a provision that the city won’t be accepting immigrants who have been dropped off by Border Patrol. Instead, the city is hiring a charter bus company to immediately bus them to other cities, including Austin and Houston.

“We entered into an understanding that we would drop the lawsuit, which we did, and then Border Patrol would deliver these migrants, about 200 or so per day, to a city facility that we leased and then we, in turn, as a city, retained a bussing company to transport these migrants farther north here in Texas,” Saenz told Border Report.