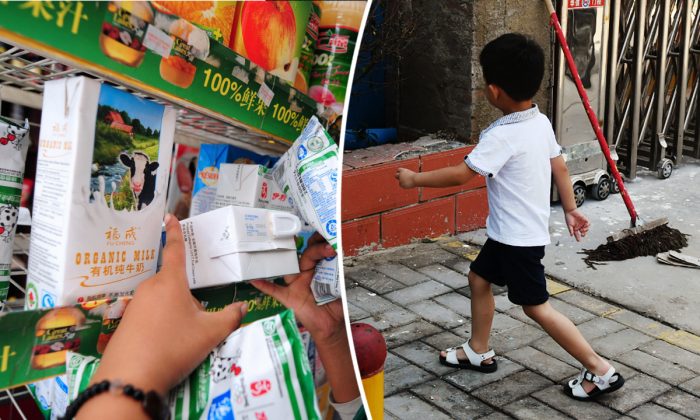 A 4-year-old boy set out from home on his own to find his older sister, all to deliver a drink to her, just because he missed her, according to multiple Chinese media outlets.

The boy, surnamed Lu, sneaked out of his house while under his grandmother’s care at about 3:00 p.m. on June 23. While he walked down the middle of busy roads for nearly 2 miles, the police in Wenzhou City, Zhejiang Province, China, noticed him and picked him up.

Later, Lu finally arrived at his sister’s classroom and was able to deliver a milk drink-box to her. Reports said she was very moved by her brother thinking of her.

Missing Sister, or a Missing Brother?

When Lu’s grandmother was not paying attention, he grabbed two small boxes of milk and sneaked out of the family’s house. The boy’s parents live and work away from home, a common phenomenon in smaller Chinese cities.

Police traffic cameras saw the boy walking alone down the center of several roads and through intersections, seemingly unaware of traffic rules.

“He was walking and skipping down the middle of the road,” an officer said to Jiangsu Public News.

Footage from a traffic camera shows the police van pull over next to the boy. By this time, the boy had already walked nearly two miles on his own.

“We stopped our car on the side of the road and asked him what he was doing,” the officer said.

After the boy explained, the police took him into the car and drove to his sister’s school.

When the boy recognized the school, he quickly got out of the car and walked up to the fifth floor ahead of the officers. However, he needed help to find her classroom.

Lu approaches the secretary’s desk. “I don’t know what class she’s in,” the boy can be heard saying in the police body camera footage. The officers asks, “What is your sister’s name? How old is she?”

When they eventually got to the classroom, the footage shows his sister and the teacher coming out into the hallway.

“You walked all the way here from home? Wow!” the teacher says. “You came from home to bring this to your sister?”

The teacher who appears stunned, asked who the boy was staying with. Lu’s sister replied and said their grandmother looks after him. Meanwhile, Lu holds out the small carton of milk and looks up to his sister.

The police could not contact the grandmother right away, so the teacher looked after Lu.

The grandmother later came and picked up Lu and his sister from the school.