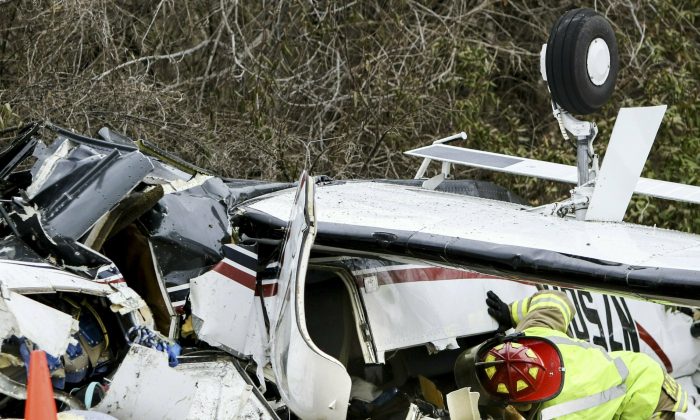 A firefighter checks the inside of a small single engine plane that crashed on March 12, 2019. (Colter Peterson/St. Louis Post-Dispatch via AP)
US News

WATERLOO, Ill.—Authorities say a 4-year-old boy and his grandparents were rescued after their small plane crashed in southern Illinois.

The fixed-wing single-engine Piper PA-32 was traveling from Mobile, Alabama, when it went down Tuesday in rural Monroe County on its way to St. Louis Downtown Airport in Cahokia, Illinois.

Details are emerging about the 18 Canadian victims of an Ethiopian Airlines plane crash in Addis Ababa, that left 157 people dead.

Here is what we know so far:

Adesanmi was a Nigerian-born professor in the Department of English Language and Literature and the Institute of African Studies at Carleton University.

He was a “towering figure in African and post-colonial scholarship,” said the school’s president, Benoit-Antoine Bacon.

The entire Carleton community is grieving the tragic death of Prof. Pius Adesanmi, a towering figure in African and post-colonial scholarship. Our thoughts are with all those who knew and loved Prof. Adesanmi and with everyone who suffered loss in that tragic crash in Ethiopia.

Mitchell Dick, a Carleton student who is finishing up a communications honors degree, said he took a first and second year African literature course with Adesanmi.

Pius Adesanmi, popular Nigerian professor and columnist based in Canada, was on the Ethiopian Airlines plane that crashed in the early hours of Sunday, SaharaReporters can confirm. @pius_adesanmi #RipPiusAdesanmi🕯️
READ MORE: https://t.co/TYpFJz8zdL pic.twitter.com/FXbjpNavF7

Dick said Adesanmi was “extremely nice and approachable,” and stood out for his passion for the subject matter.

The 33-year-old Edmonton woman and her five-year-old daughter were travelling to Kenya to visit with relatives.

Her brother, Mohamed Hassan Ali, of Toronto, said he had planned to travel with them but had to cancel last week.

Spoke to the brother of the Edmonton mom on board the deadly Ethiopian Airlines flight. Mohamed Ali says Amina Ibrahim Odowaa was well-loved w/ many friends & his niece Sofia Abdulkadir (name corrected) was friendly, funny w/ a mind of her own. He hoped they’d missed their flight pic.twitter.com/mlrWzLII4s

“She was a very nice person, very outgoing, very friendly. Had a lot of friends,” he said.

An accountant with the City of Calgary, Lwugi was on his way to Kenya to visit both his and his wife’s parents, who live in the west of the country.

“His mom was not feeling well,” Lwugi’s wife, Gladys Kivia, said in a brief interview from Calgary.

Derick Lwugi’s family says he was a man who loves peace and always strove to help others https://t.co/yiczPKyEBi #yyc pic.twitter.com/WUuUXmQgfV

The family has lived in Calgary for 12 years.

Media reports indicate the 24-year-old, who lived in Winnipeg, was among the victims.

She posted on Facebook on Saturday morning that she would be travelling to Nairobi, Kenya, for the United Nations Environment Assembly.

“Over the next week I’ll have the opportunity to discuss global environmental issues, share stories, and connect with other youth and leaders from all over the world,” she wrote.

“I feel beyond privileged to be receiving this opportunity.”