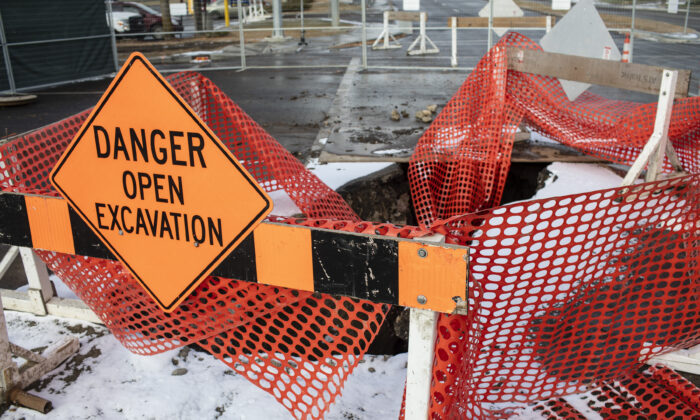 4 Vehicles Fall Into Sinkhole in Parking Lot of Edmonton Dealership

Four vehicles fell into a sinkhole that opened up in the parking lot of a car dealership in south Edmonton on Tuesday morning.

The cars were parked outside Infiniti South Edmonton just off Gateway Boulevard and south of Ellerslie Road.

Video of the sinkhole was posted on Twitter by freelance camera operator Rod Maldaner at 1:11 p.m. Eastern Time.

Some debris could be seen on the cars’ windshields. The sinkhole, which was estimated to be about 24 feet in diameter, was cordoned off by orange pylons.

At 2:34 p.m, Maldaner posted an update saying the first of the four cars was removed from the sinkhole by Cliff’s Towing Ltd, a towing, transport, and recovery company.

Dale Jackson, who’s worked with Cliff’s Towing for more than 50 years, said he was pretty shocked when he first arrived at the parking lot at 11:30 a.m.

“It’s rare to see this size of a sinkhole in a parking lot in Edmonton,” he told Global News. “It’s a big one. Luckily there’s only four in there and not a whole parking lot.”

Jackson said the vehicles would have to be lifted out by special equipment, as opposed to being towed out.

He added that two of the cars are new, one is used, and another one belongs to a customer.

According to different media outlets, the dealership has declined to comment on the incident.