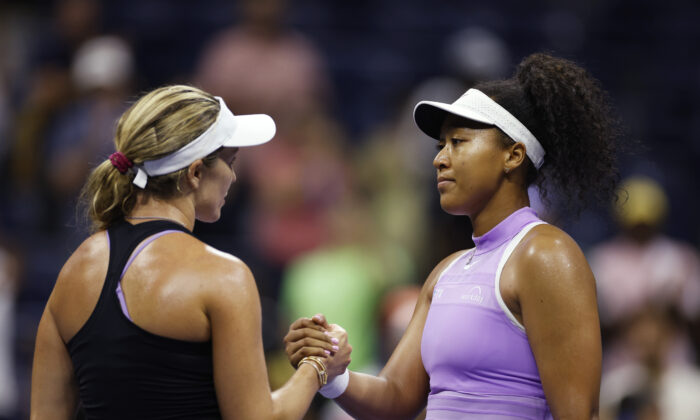 Danielle Collins (L) of the United States shakes hands with Naomi Osaka (R) of Japan after defeating her in their Women's Singles First Round match on Day Two of the 2022 US Open at USTA Billie Jean King National Tennis Center in New York City, August 30, 2022. (Sarah Stier/Getty Images)
Tennis

NEW YORK—Naomi Osaka walked off the court, headed toward the locker room and layed down, draping a towel over her face.

Collins reached her first major final at the Australian Open in January and displayed that same sort of hard-court talent with a 7–6 (5), 6–3 victory over Osaka in a shotmaking showdown that ended after Tuesday turned to Wednesday at Flushing Meadows.

“I’m the type of person that thinks a lot, to the point where I overthink. Sometimes when I play matches, I have to tell myself to stop thinking, just go more on instinct,” said Osaka, who’s been bothered by a bad back lately.

“I feel like I just have to chill a little bit, because there’s a lot of like random chaos in my head right now.”

Last season, Osaka took two extended mental health breaks, including after her third-round exit in New York. This season, Osaka lost in the third round in Australia, the first round at the French Open, then sat out Wimbledon.

“Lately, I felt really restrained. I’m not really sure why,” Osaka said. “I’m beginning to feel like I can’t hit the shots that I know I can, like especially on my forehand.”

She is now ranked 44th, which means she could have been drawn to face anyone in the first round.

This was the sort of matchup Osaka used to dominate on this surface—and against this particular player. Osaka won the U.S. Open in 2018 and 2020, and the Australian Open in 2019 and 2021, and she entered the night 3–0 against Collins, taking every set they had contested with each other.

But Collins, a Floridian seeded 19th at the U.S. Open, took time off the tour starting in July for a training block after being hampered by a bad neck and that work clearly paid off.

“Felt like her plan was to immediately put me in defense, so she would have hit the ball no matter what type of ball I hit on her side of the court. I thought she did that pretty well,” Osaka said. “I think that’s kind of what she’s known for—to be extremely aggressive.”

Collins used her backhand to great effect, compiling 11 of her 23 winners that way.

During her on-court interview, she said she modeled that shot after Jimmy Connors, her father’s favorite player. Connors responded on Twitter, writing, “Hey Danielle Collins—way to go. A great win [at] USOpen. Thanks for the shout out. …Keep grinding.”