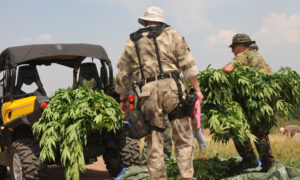 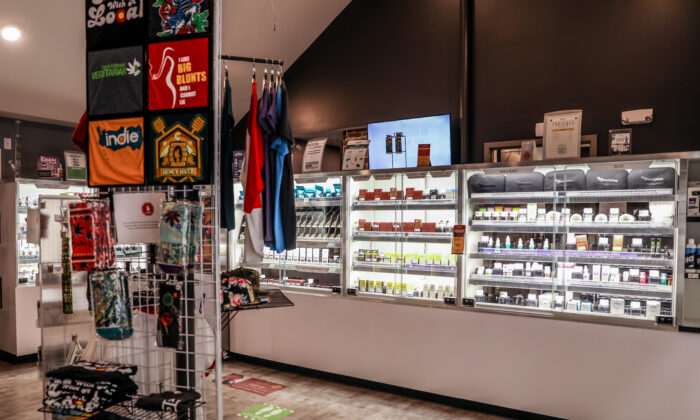 Cannabis products for sale at a dispensary in Denver, Colo., on Sept. 30, 2020. (Charlotte Cuthbertson/The Epoch Times)
US News

WASHINGTON—Residents of New Jersey, Arizona, Montana, and South Dakota all voted yes at the polls on Nov. 3 to allow the cultivation, use, and retail sale of recreational marijuana in their states.

The four states join 11 others that have legalized retail marijuana.

Meanwhile, a district attorney near Denver, is cautioning officials to learn from Colorado’s mistakes, which he says has left the state virtually unable to change what isn’t working.

Forty-two states and the District of Columbia have now legalized marijuana in some form—most commonly medical marijuana.

Federally, marijuana is illegal and listed as a Schedule 1 drug under the Controlled Substances Act. Schedule 1 drugs—which include heroin, peyote, and ecstasy—are considered the most dangerous drugs, with a high potential for misuse.

The measure in New Jersey added an amendment to its state constitution that legalizes the possession and use of marijuana for persons age 21 and older. It also legalizes the cultivation, processing, and sale of retail marijuana.

The results are still unofficial, but with 90 percent of reporting complete, 67 percent of voters said yes to the measure, according to Ballotpedia.

The State Legislature and the five-member Cannabis Regulatory Commission are now responsible for devising regulations including possession limits, home-grow rules, and retail regulations.

Rejected in a 2016 ballot (51.3 percent voted no), legalized marijuana is now a thing in Arizona, with 60 percent in favor.

The ballot description sums up the initiative as follows: “The law would allow limited marijuana possession, use, and cultivation by adults 21 or older; amend criminal penalties for marijuana possession; ban smoking marijuana in public; impose a 16% excise tax on marijuana sales to fund public programs; authorize state/local regulation of marijuana licensees; and allow expungement of marijuana offenses.”

In the Big Sky State, aside from removing local governments’ authority to regulate firearms, residents voted for a constitutional amendment that allows for marijuana to be regulated under the same conditions as alcohol.

“A person 18 years of age or older is an adult for all purposes, except that the legislature or the people by initiative may establish the legal age for purchasing, consuming, or possessing alcoholic beverages and marijuana,” the amendment states, adding “and marijuana” to the original text.

The measure passed 58 percent to 42 percent.

The second ballot measure legalizes the possession and use of marijuana for those who are  21 and older as of Jan. 1, 2021. Individuals are restricted to one ounce of marijuana or eight grams of cannabis concentrate. Residents may grow up to four plants and four seedlings for personal use in their residences.

The initiative also allows those in jail or prison on marijuana charges that are no longer valid to apply to be resentenced, and some convictions also may be expunged.

South Dakota voters decided on measures to legalize and regulate both recreational and medical marijuana in the state, as well as to provide for hemp sales.

The measure to support a medical marijuana program garnered 70 percent support from voters, while the recreational measure won on a slimmer margin of 54 percent.

A constitutional amendment will allow the recreational use of marijuana for those 21 or older, as well as permitting up to six cannabis plants to be grown in a residence where no marijuana retail establishments exist in the area.

The South Dakota state legislature is responsible for implementing a medical marijuana program and hemp sale regulations by April 2022. Medical marijuana patients will need to prove via a physician that they have a “debilitating medical condition.”

South Dakota Gov. Kristi Noem, a Republican, had already signed a bill in March that legalized industrial hemp and cannabidiol (CBD) oil in the state. CBD is a non-psychoactive ingredient in the cannabis plant.

Lobbying groups in Arizona, Montana, and South Dakota spent a combined total of almost $13.8 million in support of the measures, while those in opposition spent $886,820, according to data collected by Ballotpedia.

In addition to deciding on a new state flag, two-thirds of voters in Mississippi said yes to establishing a medical marijuana program that would accommodate people with any of 22 specific medical conditions.

Those who are issued a medical marijuana card will be able to possess up to 2.5 ounces of marijuana, but cannot smoke it in public. The program is expected to be up and running by Aug. 15, 2021.

Oregon went a step beyond and said yes to magic mushroom (Psilocybin) establishments, after a two-year development period. It also reclassified possession of drugs such as heroin, cocaine, and methamphetamines as a Class E violation rather than a Class A misdemeanor. The new regulation would result in a $100 fine or a completed health assessment, if convicted of possession.

The ballot measure also set up a fund for drug treatment programs.

DA Warns: ‘Get Your Metrics’

Colorado District Attorney George Brauchler says states that are legalizing retail marijuana sales and personal use and cultivation of the drug should learn from Colorado’s mistakes.

Brauchler serves as the district attorney for the 18th Judicial District in Colorado, which includes Arapahoe, Douglas, Elbert, and Lincoln counties—brushing against the southwest edge of Denver.

“My advice is get your metrics right now. Get your baseline of: ‘This is what our state looks like with crime related to marijuana right this minute,’ before you go down the road of regulation, or legalization,” Brauchler told The Epoch Times on Sept. 30.

Colorado didn’t do that, he said, and is now “caught scrambling” trying to figure out how to measure such things as what the marijuana-related crime metrics were prior to legalization, or the number of DUIs that were either entirely marijuana-based or from a combination of marijuana and alcohol.

Brauchler said he believes Colorado made two major mistakes when it legalized recreational marijuana, which started on Jan. 1, 2014. The first, he said, was by cementing it in the state constitution.

The second mistake, he said, was to allow individuals over 21 to grow up to 12 cannabis plants inside their house. Law enforcement now has a much more difficult time finding illegal grow houses, which undermine the legal side of the industry. And drug dogs are rendered “largely useless,” he said.

John Hickenlooper, who was governor at the time the state legalized marijuana, said in 2019 during a brief presidential run that he was initially against Colorado legalizing cannabis, but now is supportive.

“I think it’s so much better than the old system, when we sent millions of kids to prison—most of them kids of color—and not only imprisoned them, but made them felons, made their already difficult lives much, much harder,” he said at a July 2019 presidential town hall.

But while legalization has resulted in a decrease in the number of people charged with crimes of possession and use, it hasn’t had any “appreciable impact” on the prison and jail populations in his jurisdiction, Brauchler said.

He recalled that even back in the early- to mid-1990s, possession of “a joint or two” was a petty offense punishable by a $100 fine and no jail.

“And then you work your way up to higher charges based on quantity and whether you cultivate or distribute—that’s where you get the felonies,” Brauchler said.

“I promise you that that was either a plea bargain off of a much more serious case, or this person has a big criminal history,” he said about those whose records show they’re in prison for possession of more than eight ounces of marijuana. “Nobody’s going to prison. In fact, nobody’s being convicted of felonies just off of a first-time marijuana offense. That is just a myth.”

Brauchler said his jurisdiction has handled 18 first-degree murder cases related to the illegal transaction of marijuana since 2012.

“If there’s one place—Colorado—that can produce this stuff legally, and it’s illegal everywhere else, the pressure is 100 percent on Colorado to be the source of that black market marijuana,” Brauchler said. Black market marijuana from Colorado is sent all over the United States, but much of it heads east, according to the Drug Enforcement Administration (DEA).