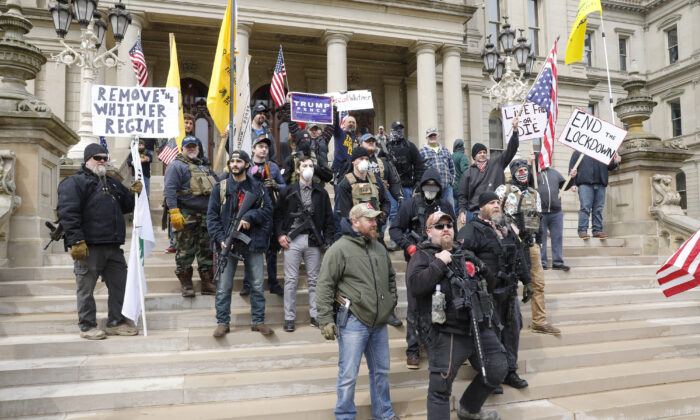 People take part in a protest for "Michiganders Against Excessive Quarantine" at the Michigan State Capitol in Lansing, Michigan on April 15, 2020. (Jeff Kowalsky/AFP via Getty Images)
By Zachary Stieber

Four sheriffs in Michigan said that Gov. Gretchen Whitmer’s stay-at-home order and other mandates include vague rules that are confusing residents.

“While we understand her desire to protect the public, we question some restrictions she has imposed as overstepping her executive authority,” the sheriffs from northern Michigan wrote in a joint statement. “She has created a vague framework of emergency laws that only confuse Michigan citizens.

“As a result, we will not have strict enforcement of these orders,” the sheriffs said. Situations will be dealt with on a case-to-case basis.

“Each of us took an oath to uphold and defend the Michigan Constitution, as well as the US Constitution, and to ensure that your God given rights are not violated. We believe we are the last line of defense in protecting your civil liberties,” they added.

State Rep. Jack O’Malley, a Republican who represents the district the sheriffs are in, didn’t immediately respond to a request for comment, nor did Gov. Whitmer’s office.

Thousands of people protested against Whitmer’s orders at the state capitol building in Lansing on Wednesday. Whitmer said at a press conference inside the building that she spoke to healthcare professionals about the protests and asked them what message they wanted her to convey to the protesters.

“Make sure they understand how serious this is,” was one message. “Tell them that they can get COVID-19 and have it for days before it even shows up in a symptom. That they might survive but someone else in their house might die from it. And tell them that the people that do lose their battle with COVID-19 die alone,” was another.

Whitmer said she understands people being frustrated and that she is frustrated as well but urged people to follow her orders. She claimed someone was handing out candy to children “barehanded” and said “we know that this rally endangered people” and “could prolong the amount of time we have to be in this posture.”

Justin Heyboer of Alto, who owns a company that grows produce, hosts weddings, does landscaping, and has a liquor license, told the Detroit Free Press that Whitmer’s mandates are crippling the business.

Two realtors from Jackson added that they believe they should be able to show houses if they follow social distancing guidelines.

“I’m just ready to go back to work,” said one, DeAnn Gumbert.

Michigan Chief Medical Executive Dr. Joneigh Khaldun told reporters that loosening the harsh restrictions too quickly or without widespread testing and other infrastructure in place would lead to problems.

“Easing them up too abruptly or without the right infrastructure in place would no doubt cause a second spike in cases and deaths,” she said.

Michigan had 28,059 confirmed cases of COVID-19 as of April 15, along with 1,921 attributed to the disease, which is caused by the CCP (Chinese Communist Party) virus, a novel coronavirus that emerged from mainland China last year. The state didn’t have information on the number of current or total patients in hospitals because of COVID-19.