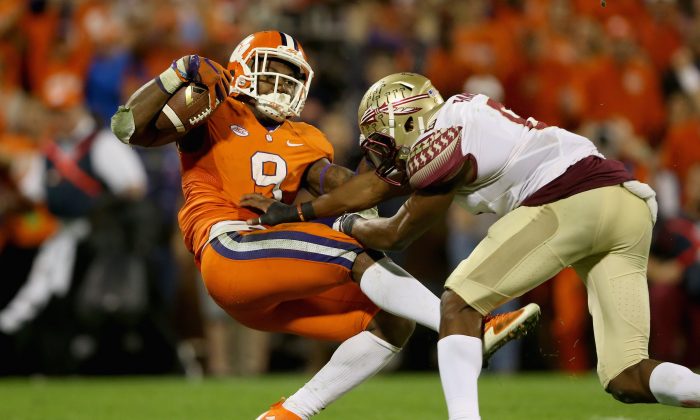 Wayne Gallman (L) and Clemson have yet to lose this year, though they nearly fell to Jalen Ramsey and Florida State. (Streeter Lecka/Getty Images)
College Sports

4 Scenarios That Would Throw the CFP Selection Into Chaos

There will be four happy teams on Dec. 6 when the College Football Playoff committee reveals its lucky postseason pairings in three weeks. Of course, getting there is a completely different story. Crazy things happen nearly every weekend on the gridiron. Here are four scenarios that could throw the whole system into chaos.

What then? Both Clemson and UNC would have one loss, but the Tar Heels would own the head-to-head battle and would have the extra shine as conference champions. Would the committee really move UNC—currently ranked 23rd—19 spots in its rankings over a three-week period based on one big win?

This isn’t out of the question, by the way. The Tar Heels only have to get past a 5–5 Virginia Tech and 6–4 NC State to make it that far, and their only blemish is a four-point loss to South Carolina in the opener. Beating Clemson wouldn’t be easy, but everyone loves an underdog.

If the Hawkeyes pull off this upset (it would be even worse if they lost to Purdue or Nebraska before then), they would look like the better team on the surface, owning the head-to-head competition while having the luster of being the conference champion.

Yet the committee states on its website that it is looking at the strength of schedule as part of the equation, and at this point the Hawkeyes have played only Northwestern and Wisconsin while avoiding Michigan, Michigan State, and Ohio State in their conference slate.

The Buckeyes still have to get past the Wolverines and Spartans to get that far, but that would be a more impressive slate than Iowa’s—plus they’re the defending champions. What will that mean to the committee? Maybe nothing, but it certainly seemed to benefit the Seminoles last year.

The Big 12 would like to avoid déjà vu, as last year’s playoff omission caused quite an outcry when the only Power 5 league without a conference championship was left without a spot in the playoffs.

This time around, if undefeated Oklahoma State beats both Baylor and Oklahoma in the next two weeks, they’ll be the unquestioned conference winner and their strength of schedule will skyrocket them back into the playoff discussion. No problems there—probably.

But if they lose to a one-loss Oklahoma on Nov. 28, the conference will be right where it was last year with a pair of co-champs to present to the committee. Of course, Baylor and TCU will have something to say again this year, but the Sooners and Cowboys are currently in the drivers’ seats.

Why the Big 12 Shouldn’t Be Worried About the CFP

4. Where to place an undefeated Houston

Houston survived Memphis 35–34 and still has Connecticut and Navy to play, but should they get past those two—and the American Athletic Conference title game—with an unblemished record, they’ll certainly give the committee some pause. Would it really exclude a non-Power 5 team from the playoffs should they go undefeated? What would be Houston’s response? Stay tuned.